It’s also National Harvey Wallbanger Day. I really, really wanted to celebrate this one. With such a colorful name and history, it was tough to resist! But we’re headed up to Seattle for a long-overdue family visit immediately after work, and can’t in good conscience knock back a cocktail before hitting the road. A Harvey Wallbanger is simply a screwdriver (vodka and orange juice) mixed with Galliano, a sweet (and bright yellow) Italian herbal liqueur. It you believe the tales, it was invented in the 1960s when a party host ran out of everything but vodka, OJ, and Galliano, and was named for a California surfer who would knock back so many of the drinks after a busy day “hanging 10” that he’d stagger into the walls. Probably false history, but it sure does make for a fun story. Note to self: this is one holiday we’ll have to revisit in 2014. 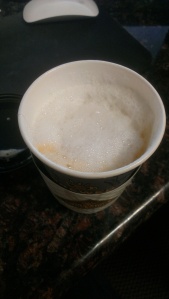 So, cappuccino it is, and I’ve got nothing against the Italian coffee drink made with espresso, hot milk, and steamed milk foam, other than the fact that it’s a pain in the ass to spell correctly. I keep leaving out a “p” or a “c” or adding an “n” where none belongs. At least this word has an interesting history, too: it comes from the Italian “cappuccio,” meaning hood, and refers to the hooded robes worn by monks and nuns of the capucin order, which were a distinctive reddish-brown in color, in 17th century Europe. It was around this time that people began adding milk to coffee, and in the 1700s, a beverage called a “Kapuziner” began appearing in Viennese coffee shops. This coffee with cream and sugar closely matched the color of those hooded robes, and the name evolved over the years, eventually turning into cappuccino in the 1930s. By then espresso machines, with an ability to brew at a higher pressure and produce a finer grind while also heating milk, had been invented, and Italians began producing the modern version of the cappuccino we are familiar with today.

Tara surprised me by dropping off a cappuccino after lunch. With a cupcake to go along with it. I gots me a good wife, that’s for sure! We are normally both more likely to order a flavored latte, but we found the cappuccino quite enjoyable. Frothy and foamy, with a nice flavor. I’d get one again!

Today’s food holiday may have you foaming at the mouth. October 7 is National Frappé Day!

If you’re wondering what a frappé is, well, it’s all Greek to me. No, really: the frappé was invented in Greece in 1957 and is considered the national beverage, popular with both locals and tourists alike. During an International Trade Fair in Thessaloniki, Nestlé  was demonstrating a new beverage geared toward children: an instant chocolate drink made by combining chocolate with milk and mixing it together in a shaker. “New” product?! This sounds suspiciously like chocolate milk to me! In any case, a Nestlé employee, Dimitris Vakondios, was craving coffee but couldn’t find any hot water nearby, so he mixed instant coffee in the shaker with cold water and ice cubes, accidentally inventing a delicious, frothy beverage. The word frappé is French in origin, and refers to anything chilled. In the past couple of decades frappés have become popular around the world; in the U.S., they refer to either a chilled or frozen iced coffee drink. Starbucks’ Frappuccino is one popular version, but even McDonald’s has recently gotten into the act with the introduction of their own frappé.

Speaking of the Golden Arches, we grabbed a caramel frappé from there to split this morning. All things considered, it wasn’t bad, but a little on the sweet side.

By now you can probably recite the history of ice cream in your sleep. But I don’t think I’ve talked about coffee yet. Allegedly, an Ethiopian goat herder named Kaldi observed his flock of animals acting strangely after eating coffee plants sometime in the 9th century. Curious about their behavior, he plucked a few of the berries and tried them himself. Feeling more alert than usual afterwards, he flagged down a passing monk, and shared this story with him. The monk took some of the berries, crushed them into a powder, and mixed them with hot water. After drinking the brew, he too was more energetic and awake than normal, and before long his entire monastery was downing coffee in an attempt to stay awake longer during prayer time. It’s unknown whether this admittedly fantastic-sounding story is true, but it sure makes for a good yarn! The earliest credible evidence for coffee dates back to the 15th century, where monasteries in Yemen roasted and brewed coffee seeds in a similar manner to how it is enjoyed today. Which tells me one thing: the life of a monk must be awfully boring.

It’s unclear when somebody thought of combining coffee and ice cream, but the result is delicious. To celebrate, we bought a small carton of Ben & Jerry’s Coffee Heath Bar Crunch. Yum!

Today we’re going to shake things up a bit. And no, that’s not the caffeine talking. July 26 is National Coffee Milkshake Day!

The deeper into our food challenge we get, the fewer new topics there are to write about. Today is no exception. I’ve already  discussed the history of the milkshake. Take one of those, add coffee, and you’ve got a coffee milkshake. Right? Pretty much! Some variations, particularly in New England, call for coffee syrup. Others call for chocolate syrup. At its most basic, a coffee milkshake consists of vanilla ice cream and coffee, blended together. Hey, speaking of, that’s something I can talk about: the history of the blender! This kitchen appliance was the creation of Stephen J. Poplawski, who owned Stevens Electric Company. In 1922, he patented his drink mixer, which had been invented to help mix together malted milkshakes and other frozen treats. In the 1930s, L. Hamilton, Chester Beach, and Fred Osius began selling Poplawski’s blender through their business, the Hamilton Beach Company. Former musician Fred Waring came up with his own version of the blender (he spelled it blendor) in 1937, and his Waring Products company went on to popularize the smoothie in the 1940s. In 1946 Fred Oster, who owned the Oster Barber Equipment Compnay, bought Stevens Electric Company and designed a new version of the blender, called the Osterizer. Blenders have remained a popular kitchen implement thanks to the need for cocktails, Frappucinos, smoothies, and other frozen drinks.

There you go! That was something interesting and different.

Pour yourself a hot cup of joe, dish up a pastry, and celebrate today’s food holiday before morning gives way to afternoon. April 7 is National Coffee Cake Day!

Coffee cake isn’t an invention so much as an evolution. Any sweet cake meant to be eaten for breakfast and paired with coffee is considered a coffee cake. It may also be eaten on a coffee break, or served to guests on a coffee table. Bonus points if it’s dished up by psychic, medium, and spiritual counselor Chip Coffey. The Danish were the first to come up with the idea of eating cake for breakfast, alongside coffee. Funny, you’d think they’d prefer a danish instead. Most coffee cakes are single layers, square or rectangular, and many feature a crumb-like topping. They often contain fruit, nuts, and cinnamon. Contrary to the name, they do not taste like coffee. Unless, of course, you dip them in coffee. In which case, yes – they taste very much like coffee. Scandinavian, German, and Dutch immigrants brought their favorite coffee cake recipes to America, where early Colonialists often took a break from killing indians to indulge in a delicious, sweet coffee cake and a steaming hot mug of java before it got too hot for murder.

Fortunately, coffee cake is pretty simple to find, even when you’re traveling. Virtually any convenience store in America is going to have it. We picked up a marionberry (no relation to the disgraced former mayor of Washington D.C.) coffee cake from the Fred Meyer in Bothell, and enjoyed that as part of a delicious homemade breakfast.

Q: What do a Black Russian and a Dirty Girl Scout have in common?
A: The ingredient in today’s food holiday! And you thought it was the start of a naughty joke…

February 27 is both National Strawberry Day and National Kahlua Day. Since strawberries aren’t in season until June – the really good ones, anyway (nothing beats Oregon and Washington strawberries!) – we decided to celebrate Kahlua. This coffee flavored liqueur is always in season!

In the 1930s, the Alvarez brothers were harvesting premium arabica coffee beans from their field in Veracruz. They enlisted the aid of a local entrepreneur and budding chemist, Senor Blanco, to use their beans in a new liqueur he was developing. Nice to know he wasn’t wasting his time on something silly like a cure for cancer. Another chemist, Montalvo Lara, refined the recipe in the early 1960s. (Apparently, Veracruz – one of Mexico’s states – is known for delicious coffee, fine art, and chemists who dabble in alcoholic concoctions). Lara’s unique flavor combination – coffee and vanilla – caught the attention of Jules Berman, an American art collector, who began importing the drink (named after the Arabic slang word for coffee, “kahwa”). He sold the recipe to Hiram Walker and Sons in 1964, then sat back and got filthy stinkin’ rich as Kahlua became the #1-selling coffee liqueur in the world.

Because of its premium ingredients and rich, distinctive flavor, Kahlua can be enjoyed on the rocks, or as the basis for a number of cocktails. In addition to the two mentioned above, it is used in the B52, White Russian and Mudslide, among others. It is also delicious served with milk or cream; Tara made this concoction for me once when I was visiting her in Nevada, and I immediately fell under its spell. So tonight, after dinner, we enjoyed a Kahlua and cream.