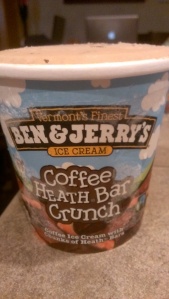 By now you can probably recite the history of ice cream in your sleep. But I don’t think I’ve talked about coffee yet. Allegedly, an Ethiopian goat herder named Kaldi observed his flock of animals acting strangely after eating coffee plants sometime in the 9th century. Curious about their behavior, he plucked a few of the berries and tried them himself. Feeling more alert than usual afterwards, he flagged down a passing monk, and shared this story with him. The monk took some of the berries, crushed them into a powder, and mixed them with hot water. After drinking the brew, he too was more energetic and awake than normal, and before long his entire monastery was downing coffee in an attempt to stay awake longer during prayer time. It’s unknown whether this admittedly fantastic-sounding story is true, but it sure makes for a good yarn! The earliest credible evidence for coffee dates back to the 15th century, where monasteries in Yemen roasted and brewed coffee seeds in a similar manner to how it is enjoyed today. Which tells me one thing: the life of a monk must be awfully boring.

It’s unclear when somebody thought of combining coffee and ice cream, but the result is delicious. To celebrate, we bought a small carton of Ben & Jerry’s Coffee Heath Bar Crunch. Yum!