Today we’re going to shake things up a bit. And no, that’s not the caffeine talking. July 26 is National Coffee Milkshake Day! 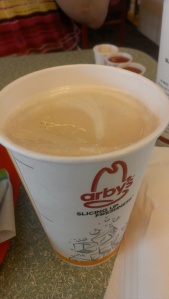 The deeper into our food challenge we get, the fewer new topics there are to write about. Today is no exception. I’ve already  discussed the history of the milkshake. Take one of those, add coffee, and you’ve got a coffee milkshake. Right? Pretty much! Some variations, particularly in New England, call for coffee syrup. Others call for chocolate syrup. At its most basic, a coffee milkshake consists of vanilla ice cream and coffee, blended together. Hey, speaking of, that’s something I can talk about: the history of the blender! This kitchen appliance was the creation of Stephen J. Poplawski, who owned Stevens Electric Company. In 1922, he patented his drink mixer, which had been invented to help mix together malted milkshakes and other frozen treats. In the 1930s, L. Hamilton, Chester Beach, and Fred Osius began selling Poplawski’s blender through their business, the Hamilton Beach Company. Former musician Fred Waring came up with his own version of the blender (he spelled it blendor) in 1937, and his Waring Products company went on to popularize the smoothie in the 1940s. In 1946 Fred Oster, who owned the Oster Barber Equipment Compnay, bought Stevens Electric Company and designed a new version of the blender, called the Osterizer. Blenders have remained a popular kitchen implement thanks to the need for cocktails, Frappucinos, smoothies, and other frozen drinks.

There you go! That was something interesting and different.