We’ve had multiple cupcake holidays this year, and on other occasions, have substituted cupcakes for cakes, saving us both calories and money. So we feel like we have paid due tribute to these small, individual cakes that – true to their name – really could be served in cups, if so desired. Most cupcakes tend to be very sweet, but I’ve always found the presence of lemon in baked goods to be a nice, light, tangy contrast to all that sugar. It’s no surprise that my favorite type of cake is lemon.

Not much else to say that hasn’t already been discussed elsewhere, so let’s just dive in! Tara made these from scratch. They were moist and delicious!

If today’s a little frosty, well, that’s no real surprise. After all, it’s November 10. And National Vanilla Cupcake Day, to boot!

Cupcakes again, eh? It seems we’ve celebrated these a dozen times this year, but in reality, there has only really been one other day specifically devoted to cupcakes: October 18 (National Chocolate Cupcake Day). But there have been several cake holidays where we opted to make or buy cupcakes instead, just to save us the trouble (and calories) associated with leftovers. Click on the link for a history of what the British refer to as “fairy cakes.” By the way, one alternate explanation for the name cupcakes has to do with the fact that the ingredients are typically measured out in cups: one cup of butter, two cups of sugar, three cups of flour, one cup of milk. And four eggs and one spoonful of baking soda. Commit that ratio to memory, and you’ll be able to whip up homemade cupcakes wherever you go!

To celebrate, we stopped by Freddy’s on the way home and picked up some miniature vanilla cupcakes. Same kind we had on our chocolate cupcake day. These little bite-sized treats lent the perfect sweet finish to our dinner!

Today’s a sweet holiday if you’re a party of one. October 18 is National Chocolate Cupcake Day!

Cupcakes are miniature cakes designed to serve one person. In other words, they’re a marvel of modern baking! They are baked in thin paper cups or an aluminum muffin pan. Cupcakes were first mentioned in 1796 in Amelia Simmons’ American Cookery cookbook; one recipe called for “a cake to be baked in small cups.” They were originally baked in individual ramekins or molds, such as tea cups, from where they took their name. In England, they were (and still are) called fairy cakes due to their diminutive size (they tend to be smaller than American cupcakes). Australians refer to them as patty cakes. Cupcakes have been popular for decades, but in the past few years have become especially trendy thanks to Americans’ thirst for nostalgia, and their appearance on the popular television show Sex And The City. Which I’ve never seen, because I’m a guy, even though it’s got the word “sex” in the title. I’ll just trust that cupcakes played a role and move right along.

To celebrate, we picked up some two-bite miniature chocolate cupcakes from WinCo. They made a perfect after dinner palate cleanser! 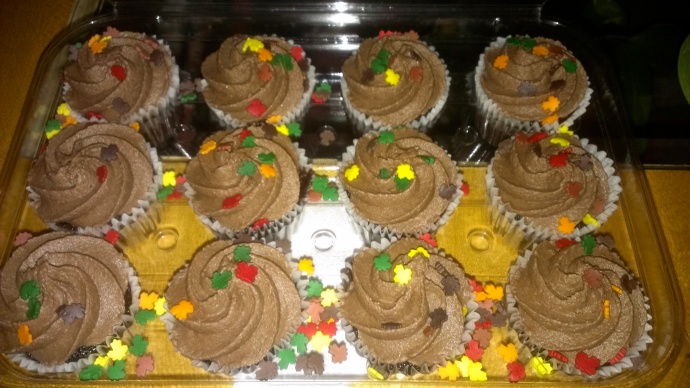