It’s also National Catfish Day. I personally would have preferred celebrating this dish instead, as I love a good fried catfish and there are a couple of really good Southern restaurants in Portland that serve catfish. But Tara isn’t real keen on the fish, so we agreed to celebrate with strawberry parfaits instead. Why break the dessert streak, anyway?

Not too long ago we had chocolate parfaits, so this is somewhat familiar territory for us. Only this time we are fortunate to have fresh strawberries to use. Specifically, Hood strawberries from Oregon, which we picked up from the farmer’s market on Sunday. Hoods are the sweetest, juiciest, most flavorful strawberries in the world. I’m convinced of this. I have friends in California who insist their strawberries are better, but to me it’s not even close. Ours blow theirs away hands down. Click on the above link if you want a refresher course on the history of parfait.

Here’s a fun and random fact about strawberries. In Bavaria, people living in the countryside have an annual rite each spring in which they tie a basket full of strawberries to the horns of their cattle as an offering to elves, who they believe love strawberries and will reward the farmers with healthy calves and an abundance of milk as a thank you gesture.

I decided to mix things up and go healthier with these parfaits. I layered Tillamook vanilla yogurt, fresh Hood strawberries from Oregon, and granola for a tasty low-cal, low-fat treat. It was very good. But also would have been more apropos for breakfast. Hmm…

Today we celebrate a redheaded doll and her cat, Custard!

Oopsie. Scratch that. We celebrate a dessert, not a cartoon character. June 14 is Flag Day…and it’s also National Strawberry Shortcake Day! And how fitting, because few dishes are as American as strawberry shortcake.

Shortcake is named for the butter, or shortening, added to dough to soften it up. It’s actually a European invention that dates to the 16th century. And even though strawberries were enjoyed in ancient Rome, putting the two ingredients together was an American concept that occurred in the 1840s. When transcontinental railroads were built during that decade, strawberries – which before had only a limited local following – were shipped all over the U.S., and became an extremely popular summertime fruit. An early American colonist was quoted as saying, “Doubtless the almighty COULD make a better berry, but doubtless he never did.” The first strawberry shortcake recipe was printed in Eliza Leslie’s 1847 cookbook Lady’s Receipt Book: A Useful Companion for Large or Small Families. Soon, strawberry shortcake parties became all the rage as a celebration of summer’s approach. This recipe has stood the test of time, and remains popular to this day.

Tara and I met up for lunch at Burgerville, which sells fresh, seasonal, individual strawberry shortcakes. We split one, and wow, was it good!

Coming tomorrow: we asked, and you shared. Our readers describe their klutziest kitchen moments ever. Stay tuned!

I’ve already talked about the kajillion and one pie holidays celebrated this year (20, to be exact). For some of these we’ve taken the easy way out. But, I promised that when June rolled around, I would make a strawberry-rhubarb pie from scratch. And I had every intention of doing so. Until I happened upon a strawberry-rhubarb pie at the grocery store for $2.99. Adding up the cost of the ingredients I’d need – fresh strawberries and rhubarb, flour, sugar, etc. – not to mention the time and labor involved – and I quickly realized that I’d be a fool to pass up the $2.99 all-the-work-is-already-done-pie from Fred Meyer.

I’ve already talked about the history of pie and discussed strawberries, so let’s delve into rhubarb, shall we? It’s such an interesting food: a giant celery-like stalk that is really, really sour. It’s actually a vegetable that originated in China, where it was used for medicinal purposes for thousands of years, and was brought to the U.S. by Benjamin Franklin, the same dude-who-was-inexplicably-never-President-but-played-a-huge-role-in-American-history. It’s a member of the buckwheat family, but you have to be careful with it: only the stalk is edible. The leaves and roots are poisonous and should be avoided. Typically, the stalks are cut into pieces and stewed with sugar, then used for cooking in dishes like…well, pies. I don’t think I’ve ever had rhubarb any other way. It matches well with strawberries because the sweetness and tartness balance each other out.

In case you’re wondering how the grocery store strawberry-rhubarb pie tasted, it was pretty good! I suppose homemade would have been better, but I’ll just have to save that for a future pie day. We have a few left, you know. Pumpkin pie, for sure…mark my words. 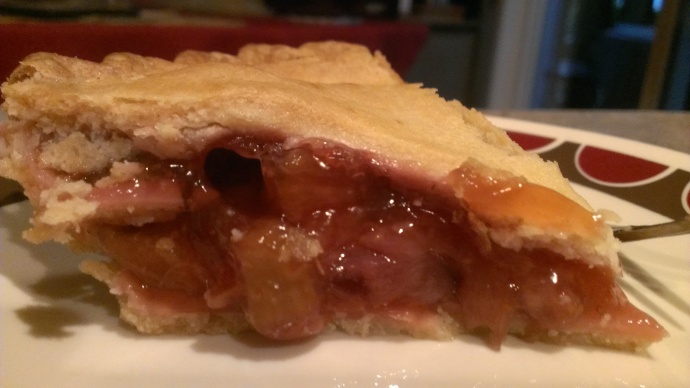 Today’s food holiday is berry delicious! May 21 is National Strawberries and Cream Day.

I had assume that strawberries and cream were just that: strawberries floating in a bowl of cream. Which doesn’t sound all that appealing. Turns out, most preparations involve whipped cream. Some even call for ice cream. Ahh…well now, that makes sense! Strawberries and whipped cream are a decadent delicacy. I decacacy, if you will.

Strawberries and cream were first served by Cardinal Thomas Wolsey, Lord Chancellor of King Henry VIII’s royal court, in the 1500s. In 1514, Wolsey built a fabulous riverside retreat called Hampton Court which he referred as the “the King’s palace” due to the frequency of Henry VIII’s visits. Opulent parties were thrown, and included lavish feasts whipped up by the chefs in Hampton Court’s oversized kitchens; they were expected to feed some 600 people twice a day. The kitchens were hot and crowded, and the chefs worked like mad, once serving a meal consisting of 44 different cooked animals and birds. One overworked chef said “this is bullshit” – or whatever profanity-laced phrase was popular at the time – and decided to put together a simple dessert that did not require plucking, skinning, butchering, or cooking. He took strawberries, combined them with thickened cream (dairy products were considered a peasant dish at the time), and served them to the royal court. Rather than declaring “off with his head!” the king enjoyed the treat, and it became popular throughout Britain. To this day, strawberries and cream are synonymous with the Wimbledon tennis tournament, where more than 6000 pounds of strawberries and 2000 pounds of cream are served.

I wish this food holiday was just a few weeks later. The best strawberries in the world are grown in the Pacific Northwest, but the season doesn’t begin until June and is much too short. We had to settle for California strawberries from the grocery store instead, which – no offense to Golden Staters – pale in comparison. But – on the plus side – I made my own whipped cream! It’s amazingly simple. Cream, sugar, and a splash of vanilla. Whip until it forms stiff peaks.

That’s what she said.