I would like to thank my colleague, Deb Rosenthal, for the following guest post. Deb is a fellow food aficionado and recently heard about a new technique for making mashed potatoes, so she stepped up to the plate and offered to write about her experience. Turns out the results were mixed.

My Quest for Perfect Mashed Potatoes

Ever since I moved 3,000 miles away from my family it became clear that if I wanted Thanksgiving dinner I would have to make it for myself. Last year I made the basics and it turned out fine. This year, I was cocky. Last year went so well, I need to outdo it! I thought to myself. Started out simple enough, brine the turkey, two different from-scratch stuffings, balsamic glazed brussel sprouts and the list goes on. I was stumped when I got to the mashed potatoes. What more could be done to the simple potato?

The answer came to me through the help of the internet: baking the potatoes instead of boiling. This method allows you to make creamier mashed potatoes; since there is no addition of water in the cooking process you can add more milk and butter. I wasn’t sure about this so I did a test potato a few nights before the big day. It worked out great! I baked the potato in my toaster oven for 40 minutes, scooped the insides out (leaving the unwashed skins behind) and easily mashed it with milk and butter. It was delicious. The next day at work I told everyone about my new discovery, claiming it was going to lead to better mashed potatoes in a fraction of the time.

Finally, Turkey Day arrived. I was riding high on my horse, I had even volunteered to write about this experience for Mark’s blog, as I knew I wanted to share the discovery with others. I started out, happily documenting my experience along the way.

Pre heat over, wash the potatoes, place on a baking sheet and pierce with fork – check! Everything is going great so far. 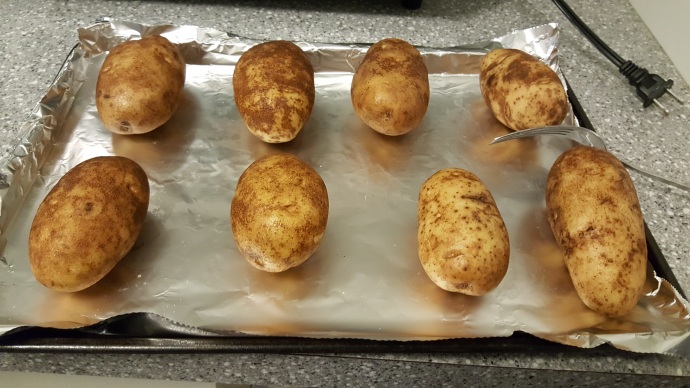 Bake for 45 minutes, take out of oven and cut in half – check! 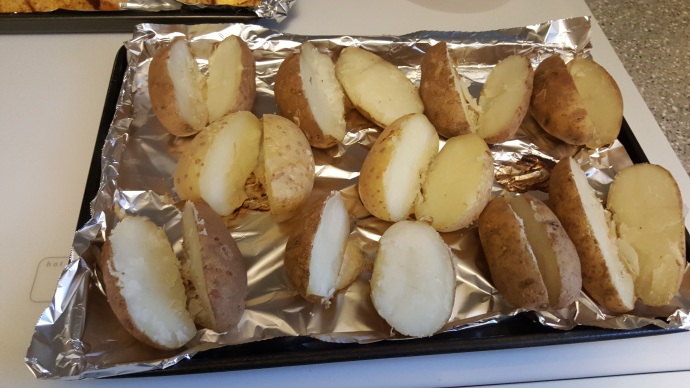 This is when things went downhill. I had laid out the whole day, giving myself ample time to cook everything in order to have dinner on the table by 4. I was not supposed to start the potatoes until noon but I had woken up early and figured I might as well get a jump on the day. After I took the potatoes out of the oven I thought to myself (and please note – this is the moment I look back on as the start of the train wreck) I’m in no rush, might as well hold off on dealing with the potatoes until after coffee. Several cups of coffee later I returned to the kitchen to start scooping potatoes.

Turns out, once potatoes are cooled they are not as soft as when they are piping hot from the oven. I ended up having to peel all the peels with the back of a spoon, instead of simply scooping the potato out of the skins. 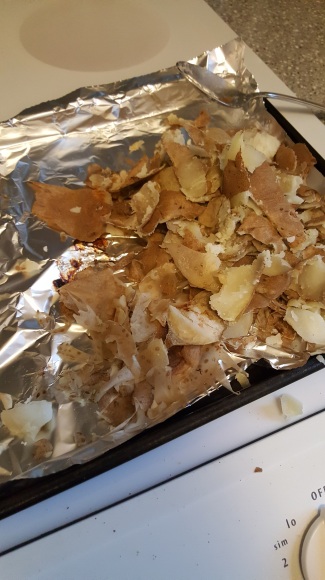 It gets worse. Have you ever tried to mash a hard potato? Of course not; that’s a stupid thing to do. Well, yours truly got a 45-minute lesson on that. When baked potatoes cool they get hard. Mashing cold potatoes is the worst. Legit. The. Worst. It was throw-the-bowl-of-potatoes-out-the-window-and-cancel-the-rest-of-Thanksgiving hard. This is also the point where I stopped documenting my journey.

Once the potatoes were finally sort of all mashed up I added in a warmed mixture of butter and milk. My original thoughts were correct, baked potatoes were able to absorb more liquid than boiled ones. To add more flavor, I decided to then roast a whole head of garlic and mash that into a paste to fold into the potatoes. This yielded some really good, and really garlicy mashed potatoes. Just for the record, this final step only occurred to me after I took a 45-minute break to drink some tea and read a book.

In case anyone is wondering, the rest of the dinner turned out great. Everything went sort-of according to plan. Yes, the turkey came out of the oven an hour and a half later than scheduled and the gravy took what felt like a year and a half to reach a boil, but all in all I will say it was a success.

While the potatoes did turn out great, do I think they were any better than simple boiled potatoes? No. I think peeling the potatoes, throwing them into a pot of boiling water and then draining and mashing them is easier. And really, at the end of the day, it all tastes the same covered in gravy and cranberry sauce. 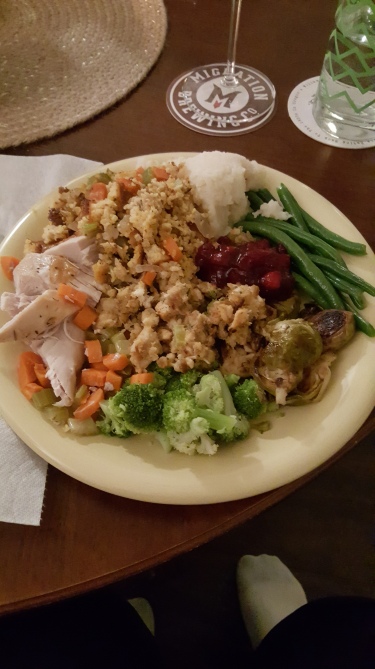 Thank you once again for being a guinea pig, Deb. Remember: it’s all in the name of science! If you have an idea for a food-related post and would like to be a guest contributor to Eat My Words, just drop me a line or leave a comment below!

If whoever created these food holidays had a sense of humor, then the last day of March would be dedicated to lamb. (You know – “in like a lion, out like a lamb” and all). But alas, it is National Tater Day. Not to be confused with National Potato Day (October 27). Oh, and it’s also National Oranges and Lemons Day. And National Clams on the Half Shell Day. And on top of all that, it’s Easter, too. Sheesh! (I mean, Happy Easter). After learning about the clamming accident that has led to supply shortages, we decided to focus our efforts on both potatoes and oranges and lemons, Knocking them all out in one sitting.

Potatoes grew wild throughout the Americas, and were first domesticated in Peru sometime between 8000-5000 B.C. A well-kept secret at first, when the Spanish conquest decimated the Inca Empire, the Spanish brought potatoes to Europe in the 16th century. Over the next couple of hundred years they spread around the world, becoming a staple crop in many countries. Plentiful and easy to grow, the potato is responsible for an estimated 25% of the world’s population growth during this time. Some of this population gain was wiped out in 1845, when the Irish Potato Famine devastated that country, wiping out the entire crop and leading to approximately one million deaths, and causing a mass exodus from the land o’ leprechauns.

Oranges and lemons are two of the most popular citrus fruits. I feel bad leaving out limes and grapefruit, but rules is rules, man. There’s a popular English nursery rhyme about oranges and lemons that goes,

Oranges and lemons,
Say the bells of St. Clement’s.

You owe me five farthings,
Say the bells of St. Martin’s.

When will you pay me?
Say the bells of Old Bailey.

When I grow rich,
Say the bells of Shoreditch.

When will that be?
Say the bells of Stepney.

I do not know,
Says the great bell of Bow.

Yikes! That’s supposed to help a kid fall asleep? How will that work, with the threat of decapitation looming? Seems like something the brothers Grimm might conjure up. It is believed that oranges originated somewhere in Asia around 2500 B.C. In Europe, oranges and other citrus fruits were grown largely for medicinal purposes; Vitamin C is still considered an excellent cold remedy to this day. Lemons came from the same region, and are a cross between the sour orange and the citron. Christopher Columbus brought lemon seeds along on his voyages, introducing them throughout the New World. Today, they – and oranges – grow exceptionally well in Florida and California.

We celebrated both food holidays with a delicious breakfast (using the taters and oranges) and later, iced tea and sweet tea vodka with fresh lemons. Everything was great!

Taters, oranges, and lemons. That’s two food holidays in one!