As promised, occasionally we’ll celebrate some of the food holidays we chose to skip last year in favor of others. Today marks one of those. January 15 is National Fresh Squeezed Juice Day!

Actually, this is a recent addition to the calendar. I updated the National Food Holidays page to directly link to each challenge, and in the process, did some double-checking against a variety of online calendars looking for missed holidays. There were a bunch, as it turns out. I lamented often last year about the lack of consistency between calendars and our “majority rules” stipulation. I have yet to find two food holiday calendars that are perfectly identical, but feels ours is as close to perfect as it gets!

This holiday was a timely one, as Tara had zested a bunch of lemons over the weekend in order to bake my dad a birthday cake, and had no idea what to do with the leftover peeled lemons. I’ve always subscribed to the axiom “when life hands you lemons, make lemonade!” – and in this case, I took that quite literally. Fresh squeezed lemonade it was!

Fresh squeezed juices have been a staple of the American diet ever since some klutzy Colonist accidentally stepped on an orange. Actually, that’s not what the history books tell us, though it makes for a humorous story. Humans have probably been drinking the juices from a variety of fruits for thousands of years, but the modern juice industry got its start in the mid-1910s thanks to an excess of oranges. California farmers had grown too many to sell, and not wanting to waste them, decided to juice them instead, taking advantage of a new process known as pasteurization. Now the juice could be stored for longer periods of time, and the nation’s railway system was able to whisk away cartons to major cities around the country. The juicing industry was born.

Of course, this refers to commercial juice, which is anything but fresh-squeezed. Fresh juice was seen as a healthy alternative to sodas and other beverages, and in the 1980s the popularity of juice bars (and home juicing machines) exploded. Suddenly, every Dick and Jane worth their salt was juicing their own fresh squeezed oranges, apples, grapefruits, pineapples, tomatoes, grapes, carrots, cranberries, mangoes, passion fruit, and pomegranates.

I have always been a big fan of lemonade, and fresh squeezed is about a thousand times superior to Minute Maid or any type of frozen concentrate. Tonight’s was no exception!

Orange you glad today’s food holiday is fresh and fruity? May 4 is National Orange Juice Day!

It’s also National Homebrew Today and National Candied Orange Peel Day. I don’t like beer, and even if I did, it’s doubtful that I’d be brewing my own anyway. And candied orange peels? Do people really eat those?? Choosing to celebrate with a tall, cold glass of orange juice is what we in the biz like to call a “no-brainer.”

Orange juice is one of the most popular juices in the United States. Spanish explorers planted the first orange trees in St. Augustine, Florida in the 16th century. The warm climate and abundant rainfall proved to be the perfect growing environment, and Florida oranges became wildly popular. As delicious as the fresh-squeezed juice was, there was no way to make it available commercially, as it would only last a day before going bad. In 1910, an overabundance of oranges in California (which had also begun growing the citrus fruit) forced growers to destroy 30% of the state’s orange trees, as they had nothing to do with the excess fruit. Soon after, pasteurization was developed, allowing citrus growers to juice the excess fruit and ship it to grocery stores all over the country, where it could be stored for longer periods of time. Growers began touting the health benefits of vitamin C, and by the 1920s orange juice had become a breakfast staple in America, replacing stewed fruit (a popular British breakfast accompaniment) as the go-to choice. Frozen concentrated orange juice was invented in 1948, inspired by the lack of fresh fruit available to soldiers during World War II. The slang term “OJ” popped up around this time, referring to both the juice and, later,  a wife-murdering-former-NFL-star-who-took-an-infamous-ride-in-a-white-Ford-Bronco.

We poured ourselves a tall glass of orange juice in order to celebrate the holiday! 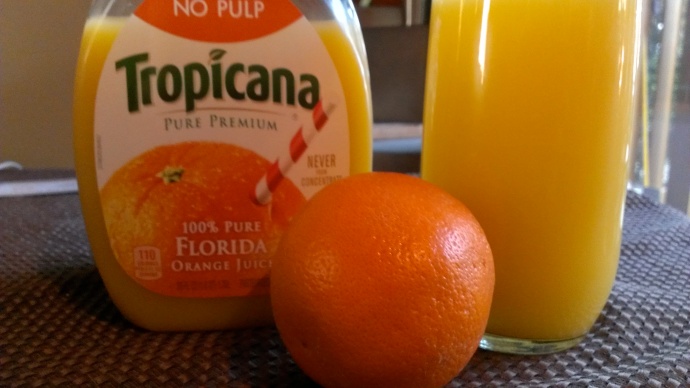 If whoever created these food holidays had a sense of humor, then the last day of March would be dedicated to lamb. (You know – “in like a lion, out like a lamb” and all). But alas, it is National Tater Day. Not to be confused with National Potato Day (October 27). Oh, and it’s also National Oranges and Lemons Day. And National Clams on the Half Shell Day. And on top of all that, it’s Easter, too. Sheesh! (I mean, Happy Easter). After learning about the clamming accident that has led to supply shortages, we decided to focus our efforts on both potatoes and oranges and lemons, Knocking them all out in one sitting.

Potatoes grew wild throughout the Americas, and were first domesticated in Peru sometime between 8000-5000 B.C. A well-kept secret at first, when the Spanish conquest decimated the Inca Empire, the Spanish brought potatoes to Europe in the 16th century. Over the next couple of hundred years they spread around the world, becoming a staple crop in many countries. Plentiful and easy to grow, the potato is responsible for an estimated 25% of the world’s population growth during this time. Some of this population gain was wiped out in 1845, when the Irish Potato Famine devastated that country, wiping out the entire crop and leading to approximately one million deaths, and causing a mass exodus from the land o’ leprechauns.

Oranges and lemons are two of the most popular citrus fruits. I feel bad leaving out limes and grapefruit, but rules is rules, man. There’s a popular English nursery rhyme about oranges and lemons that goes,

Oranges and lemons,
Say the bells of St. Clement’s.

You owe me five farthings,
Say the bells of St. Martin’s.

When will you pay me?
Say the bells of Old Bailey.

When I grow rich,
Say the bells of Shoreditch.

When will that be?
Say the bells of Stepney.

I do not know,
Says the great bell of Bow.

Yikes! That’s supposed to help a kid fall asleep? How will that work, with the threat of decapitation looming? Seems like something the brothers Grimm might conjure up. It is believed that oranges originated somewhere in Asia around 2500 B.C. In Europe, oranges and other citrus fruits were grown largely for medicinal purposes; Vitamin C is still considered an excellent cold remedy to this day. Lemons came from the same region, and are a cross between the sour orange and the citron. Christopher Columbus brought lemon seeds along on his voyages, introducing them throughout the New World. Today, they – and oranges – grow exceptionally well in Florida and California.

We celebrated both food holidays with a delicious breakfast (using the taters and oranges) and later, iced tea and sweet tea vodka with fresh lemons. Everything was great!

Taters, oranges, and lemons. That’s two food holidays in one!