Posted on September 7, 2014 by Mark Petruska

Looking for a cure for the late-summertime blues? We’ve got just the ticket. September 7 is National Salami Day!

This is one of those rare food holidays whose lineage can easily be traced. It got its start in 2006 in Henrico, Virginia thanks to the efforts of the Salami Appreciation Society. Yes, that’s a real group. Salami is a cured sausage that has been fermented and air-dried. Once it has been sliced, it can be left out at room temperature for up to 40 days. This was a big draw for Southern European peasants, who could not afford fancy refrigerators with water and ice dispensers built into the doors. Also, fancy refrigerators with water and ice dispensers built into the doors did not exist at the time, but that’s neither here nor there. Salami represented an inexpensive and ready source of meat to supplement a diet that was otherwise lacking in protein. The word salami is derived from the Italian salame which originates from the word sale, meaning “salt” (and not half-priced shoes, sorry to disappoint the ladies (or the men who like inexpensive footwear. Eat My Words can never be accused of sexism)).

Salami is traditionally made from marbled pork or beef, though it has also been prepared with venison, turkey, goose, donkey, and horse. Common ingredients include salt, pepper, garlic, vinegar, wine, herbs, and spices. The whole shebang is left to ferment for 24 hours before being stuffed into a casing and hung up to cure. Curing time varies depending on the climate and type of casing. Once fermented, the salami is dried, and nitrates or nitrites are added to prevent bacterial growth and improve the color. There are many varieties of salami available including chorizo, cotto, Genovese, Milanese, Lardo, Nduja, pepperoni, soppressata, and Saucisson.

To celebrate, I picked up a pound of hard salami from the grocery store deli. This variety usually contains more beef than pork and is smoked. I should clarify, it is smoked in a smoker before being sold. You do not roll it up, light an end, and inhale. We stuck ours between two slices of bread, added American cheese, mustard, and mayo, and called it a sandwich. 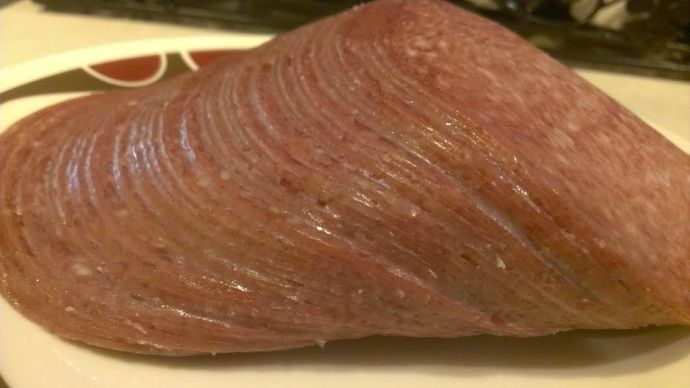