Good news: despite the lack of recent posts, I am happy to report we are still alive. Better news: today we are walking around say “yo ho ho” a lot. Not because Christmas is right around the corner – it isn’t, and that first H is a Y, thank you very much – but because August 16 is dedicated to probably the tastiest liquor around. It’s National Rum Day!

Yo ho ho and a bottle of yum is more like it.

The word rum is believed to be derived from the last syllable of the Latin word for sugar, saccharum. Or it might come from the Romanian word rum, meaning “strong” or “potent.” Both explanations make sense to me. Interestingly enough, rum was originally a byproduct of sugar cane; it’s actually fermented molasses, which occurs during the sugar refining process. Nobody knew what to do with molasses initially, and viewed it as nothing more than industrial waste. Until some whip-smart plantation slaves in the Caribbean during the 17th century discovered the molasses could be fermented and turned into a tasty alcoholic beverage. Goodbye industrial waste, hello industrial wasted! It quickly gained popularity in Colonial North America, where the first rum distillery was opened in 1664 on Staten Island. In fact, rum became so highly prized, for a while it was accepted as currency – alongside gold – in Europe. Liquid gold, if we’re getting technical.

I’ve long been a fan of rum. Maybe not as big a fan as some people…

But I have my moments.

To celebrate, I had a rum and Coke. And also a shot of the rum, straight up. Bottoms up! 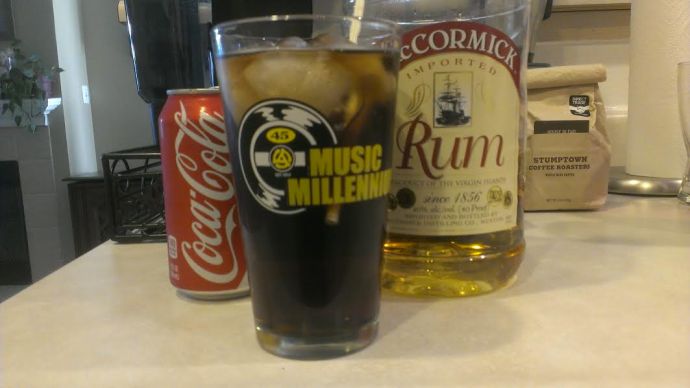