You might come to roux this day if you miss out on the food du jour. October 12 is National Gumbo Day!

Gumbo is a thick stew that contains a rich stock, meat and/or shellfish, a thickener, rice, and vegetables. It is as synonymous with Louisiana as jazz, the bayou, and Mardi Gras, and is the official cuisine of that state. No wonder: it originated in southern Louisiana in the 18th century, when slaves arrived from West Africa. They brought with them recipes featuring ki ngombo, or okra, many of them stews served with meat and shrimp. By 1764 they were mixing these stews with rice to make a hearty meal. Most gumbos are thickened with a roux, a mixture of flour and oil that is a staple of French cooking. The local Choctaw indians utilized filé powder, made with ground sassafras leaves, as a thickening agent in place of (or in addition to) a roux. Interestingly, the Choctaw word for sassafras is kombo, leading many to speculate that the dish actually originated with Native American tribes in the region. Whether it is Creole, Cajun, Indian, or African in origin is open for debate. Over the years, German immigrants introduced sausage to the recipe; fishermen supplied oysters, shrimp, and crab; and Canary Islanders brought a fondness for strongly seasoned foods to the table, introducing cayenne pepper. Virtually anything could be added to a pot of simmering gumbo: there are even references to owl, squirrel, and muskrat. The first written record of gumbo dates to 1803, where it was served at a gubernatorial reception in New Orleans. The dish’s popularity was limited to the Gulf Coast region until the 1970s, when Louisiana Senator Alan Ellender began cooking gumbo for his colleagues, including 5 separate U.S. presidents. When he passed away in 1972, the Senate added Louisiana Creole Gumbo to its cafeteria menu in honor of Ellender. Popular Louisiana chefs such as Paul Prudhomme and Emeril Lagasse further popularized gumbo, turning it into a mainstream meal.

To celebrate, I decided to make a gumbo from scratch. This is no small feat, but on a cool and damp Saturday afternoon and with Tara recovering from a cold, it was the perfect opportunity to make a nice slow-cooked meal. I’ve made gumbo a couple of times in my life, but previously, I used a jar of roux a friend in Louisiana had sent my way. Unfortunately that jar was long gone, so I had no choice but to make my own roux. That alone is a 45+ minute process, but I was pleased with the results. I used a recipe from Donald Link’s Real Cajun cookbook, one of many I own from my days as a book reviewer. I deviated from the recipe in places, namely the roux, and the fact that it called for fried chicken but I just wanted to brown mine. Everything else was the same – the vegetables, seasonings, andouille sausage, etc. And I have to say, it turned out delicious! I was very pleased with the results, especially considering the fact that I’ve rarely ventured south of the Mason-Dixon line. 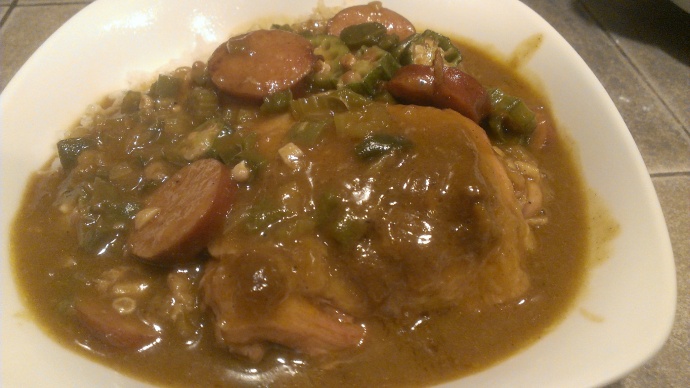