Even gringos will shout “ole!” when digging into today’s food of honor. October 4 is National Taco Day!

It’s also National Vodka Day, and that’s a shame; a more appropriate pairing would be tequila or margaritas, but alas, both have already had their day in the sun. Tacos always sound good, but vodka is tasteless, so we had no problem deciding which of today’s dual food holidays we would celebrate.

Tacos originated in Mexico (duh) and consist of a tortilla wrapped around a filling. The name is generic; like a “sandwich,” a taco can consist of pretty much anything that fits inside the tortilla. The sky’s the limit when it comes to ingredients and toppings; popular fillings include beef, pork, chicken, and seafood, and toppings such as lettuce, onions, tomatoes, salsa, guacamole, and sour cream are all common. The word “taco” originated in 18th century Mexican silver mines; it was the name given to an explosive charge that was wrapped in paper, filled with gunpowder, and used to break up the ore. The tortilla-and-meat combo resembled this little bomb (and could also be considered a “gut bomb” in its own right, depending on the spiciness level). Tacos date back centuries; early inhabitants of the Valley of Mexico enjoyed theirs with small fish, while residents of Morelos and Guerrero preferred live insects such as ants (shudder), and those in Puebla and Oaxaca opted for locusts and snails. The first taco recipes in the U.S. appeared in California in 1914; in Bertha Haffner-Ginger’s California Mexican-Spanish Cookbook, tacos were described as “made by putting chopped cooked beef and chili sauce in a tortilla made of meal and flour; folded, edges sealed together with egg; fried in deep fat, chile sauce served over it.” Tacos became especially popular in America after World War II, where Mexican-Americans introduced them to their caucasian soldier buddies. (We, in turn, gave them Twinkies).

To celebrate, Tara and I headed into Portland to check out ¿Por Que No?, a tacqueria that gets a lot of good press and that we had been meaning to try for some time. They did not disappoint! We sampled carnitas, chicken, chorizo, and brisket tacos amongst us, and found them all to be very good. Best of all, the line that usually snakes halfway down the block was only about a dozen people deep when we arrived, so we didn’t have too terribly long a wait to contend with. 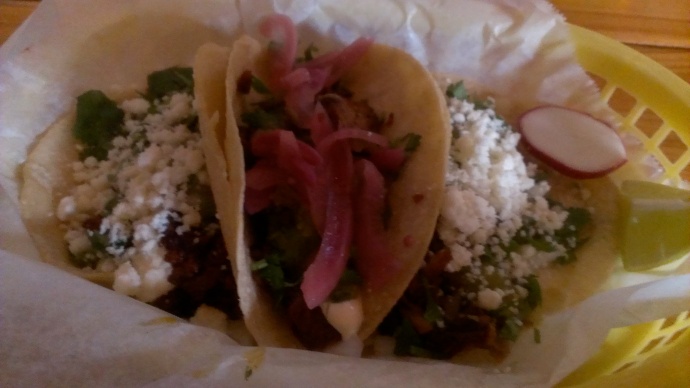