Today we celebrate a food that is known by several names: it is called either caramel custard, crème caramel, or flan, depending on where in the world you are ordering it. Officially, October 3 is National Caramel Custard Day!

Caramel custard is like crème brûlée, but with a layer of soft caramel on top instead of a hard caramel coating. It used to be especially popular in European restaurants; explains food historian Alan Davidson, “In the later part of the 20th century crème caramel occupied an excessively large amount of territory in European restaurant dessert menus. This was probably due to the convenience, for restaurateurs, of being able to prepare a lot in advance and keep them until needed.” Nowadays, it’s harder to find in Europe, but is extremely common in Latin American countries, where it is eaten with dulce de leche.

It’s a little tricky to prepare, requiring the use of a ramekin and a water bath, but at least you don’t need a blowtorch as you do when preparing an authentic  crème brûlée. I’ll admit, I was a little nervous heading into this holiday, because the last time custard was on the menu, it was a near-disaster. It didn’t set right, melted during transport (this was during our spontaneous road trip to Ely), and was an unappealing “watery sour cream” color and consistency. Blech. Easily the most challenging of our challenges to date. Fortunately, we had much better luck with the caramel custard. We bought a packaged flan mix in the grocery store, and Tara prepared it for dessert. This time everything set up perfectly! We found the consistency a little unusual – not as smooth and creamy as pudding – but the flavor wasn’t bad. And it looked beautiful! 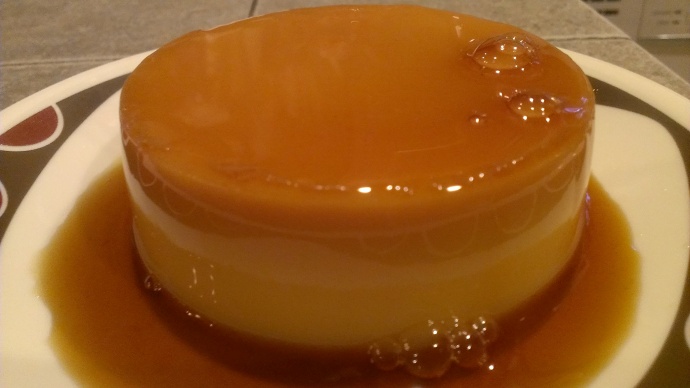