If you like your cocktails on the tart side, today’s going to be right up your alley. August 25 is National Whiskey Sour Day!

The whiskey sour is considered a “retro” cocktail. This simply means it was popular a long time ago, fell out of favor, and is now making a splash all over again. A splash that includes whiskey, lemon juice, and sugar, the basic ingredients for a whiskey sour (though you could cheat and use commercial sour mix instead). Bourbon is often substituted for whiskey, though really, they are the same thing: bourbon is simply a type of whiskey. To help explain the difference, the Jim Beam website says, All bourbon is whiskey but not all whiskey is bourbon. Tennessee whiskey? Not bourbon. Canadian whiskey? Nope. Scotch? Definitely not bourbon… you get the idea.

Are you as confused as I am now? I’m not even going to attempt to decipher scotch.

Adding sour ingredients to cocktails began in the 1700s, when British sailors added lime juice to rum in order to prevent scurvy on those long ocean voyages. And in order to preserve the fresh juice, a little bit of rum – or gin, or whiskey – was added to the juice, as well. One can only imagine the spirited breakfast conversations that ensued after downing a glass of “juice.” Soon, these sailors discovered that the addition of a little bit of sugar made it all taste better. The oldest reference to a whiskey sour dates to a Wisconsin newspaper article published in 1870. A Peruvian newspaper called El Comercio de Iquique published a story in 1962 claiming that Elliot Stubb, an English steward aboard a ship named Sunshine, created the whiskey sour in 1872, though historian Oreste Plath had originally attributed the Pisco Sour to Stubb, apparently in error.

Either way, the whiskey sour has long been a favorite of mine. In fact, the villain in my novel No Time For Kings is described as having a fondness for whiskey sours, and the drink appears in a key scene in Chapter 15. Yes, that’s a shameless plug. It would be more shameless if I mentioned the Kindle version (just follow the link if interested) is priced at a very reasonable $2.99. Ahem.

Back to the food blog. Fun fact about whiskey: it can remain bottled for 100 years, and will still be good when opened. Once it is opened, it’ll remain drinkable for about 5 years. So if you were to buy a bottle today, you could conceivably still drink it on August 25, 2118. But boy, would you be old.

To celebrate, I whipped us up a whiskey sour. Or two. Hey, you gotta do what you gotta do, right? 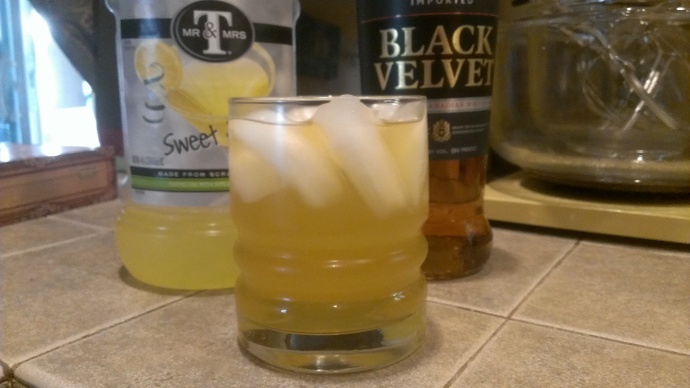