When you’re playing the slots, three cherries in a row is a lucky spin. Today’s food of honor requires more than just three cherries, but you’ll feel lucky you get to indulge in such a sweet treat. May 17 is National Cherry Cobbler Day!

We’ve already celebrated one cobbler-themed food holiday this year: April 13 was National Peach Cobbler Day. I already talked about the history of the cobbler then, and its many other fun-to-say-out-loud names (pandowdy, buckle, grunt, slump), so I won’t bother pushing the Deja Vu button again. How about a fun cherry fact instead? The United States grows 370 million pounds of cherries a year. Nearly half of the annual harvest – 175 million pounds, to be exact – is either frozen, canned, or packed into maraschino cherry jars.

Last time, we bought a pricey but very good cobbler from a local supermarket. I couldn’t find a suitable cherry cobbler this time around, but I didn’t search too strenuously, either. I figured I should just make one from scratch this time; I can bake a decent enough pie, and cobbler is like a poor man’s version of pie, anyway. Unfortunately I couldn’t find any fresh cherries – those are probably still a few weeks away yet – so I had to settle for frozen cherries instead. Despite this grievous misfortune, the cobbler still turned out pretty good.

I had to make it the night before, since Tara and I are headed up to Seattle again this weekend. But that just gave us an excuse to indulge in a little cobbler for breakfast. Nothin’ wrong with that! It turned out okay. A little sweet for my tastes, though. 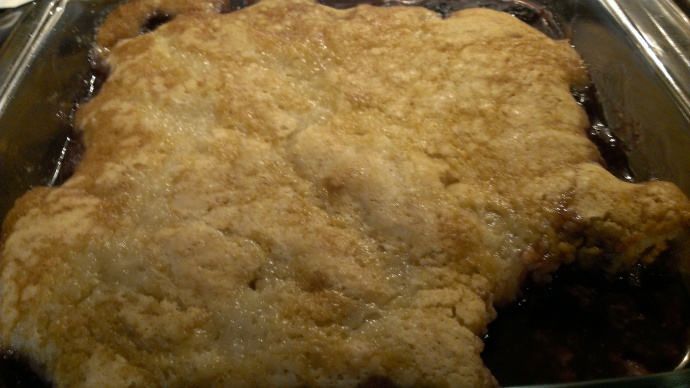