Today is National Plum Pudding Day! If you’re wondering what plum pudding is, you’re not alone – so were we! Imagine our surprise when we learned that plum pudding contains no plums, and is more of a cake than a pudding. Before you scream “false advertising!” you have to understand that in Medieval times, when the dessert was first invented, raisins were called plums.

Plum pudding is also known as Christmas pudding, and in England – where it originated – it is traditionally served at Christmas time. It was historically prepared with 13 ingredients, to represent Jesus Christ and the twelve apostles, and made on the 25th Sunday after Trinity (which occurs on the 8th Sunday after Easter, which itself occurs on the first Sunday after the first full moon of the vernal equinox (March 21). How anybody keeps track of all that is beyond me). It all roughly translates to Christmas time anyway, hence the name. Tradition dictates that all members of the family grab hold of the wooden spoon and help to stir the batter while making a wish. (If it were me, I’d wish we were making something other than plum pudding, but more on that later). This was known as “Stir-Up Sunday,” not to be confused with “Stirrup Sunday,” the popular gynecological holiday. Plum pudding was actually banned during the Puritan period in England because it was deemed “sinfully rich.” It used to be baked with silver coins and miniature thimbles, anchors, and wishbones, to signify wealth, thrift, safe harbor, and luck. This practice died out because people could never find their Monopoly pieces when they were ready to play. 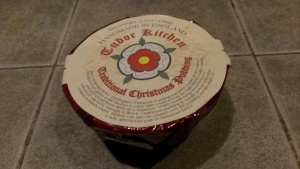 I’m glad we planned ahead for the plum pudding, because lemme tell ya, it is a bitch to find in stores. Maybe it’s common in Liverpool, but in Portland? Not so much. So we looked up some recipes, and to say they looked daunting is an understatement. The ingredient list is a mile long (13, my ass!) and includes things like suet, mace, and currants. Oh, plus, after steaming it for six hours, you’ve got to let it all sit – in order for the flavors to blend together – for three weeks. This food holiday might easily have tripped us up had we not planned in advance. Planning in advance, in this case, meant ordering a small plum pudding online from Blue Moon Tea, an importer of teas and foods from the UK located just a few hours north in Tacoma, Washington. Whew! We ordered a small 3.5-ounce container of plum pudding, and believe me, that was plenty. The stuff is dark (because of treacle and other dark sugars, and the long cooking time) and not very appealing in appearance. We microwaved it for 30 seconds and each had a fork full with our morning coffee. It is cloyingly sweet and fruity, and reminds me of fruitcake. Suffice it to say, neither Tara nor I were real impressed with plum pudding.