When I learned today was National Peppermint Pattie Day, I was confused. Tara makes us a drink called the Peppermint Patty, with hot chocolate and peppermint Schnapps, and I at first assumed this is what we were celebrating, cold winter day and all. Nope. And we’re not celebrating Charles Schulz’s fictional cartoon character from Peanuts, either. Instead, we are honoring the York Peppermint Pattie®.

The Peppermint Pattie was created by Henry Kessler of the York Cone Company in 1940. York’s traffic cones were selling well, but didn’t taste very good, so he decided to branch out into candy. Wait a sec…he sold ice cream cones. My bad. Anyway, chocolate covered peppermint candies had been around for years, but Kessler thought they were too soft, so he set out to create a crispier version, even performing a “snap test” to ensure it would break cleanly in the middle. The Peppermint Pattie became so popular, York stopped making cones altogether. The candy was only available regionally – mainly in the Northeastern United States – until 1975, when Peter Paul (which purchased the York Cone Company a few years earlier) rolled out the York Peppermint Pattie nationally. Peter Paul merged with Cadbury, and then Hershey’s acquired Cadbury, so nowadays they are the ones making the York Peppermint Pattie. In Mexico, no less. Peppermint Patties are known for their strong, clean flavors – cool, minty sugar surrounded by crispy dark chocolate – and have far fewer calories and fat than competing candy bars. They’re the health food of the candy world!

To celebrate the holiday, we just stuck with the basics and enjoyed a Peppermint Pattie after dinner. Sometimes the simplest solution is the best, especially with something so distinctly flavorful. 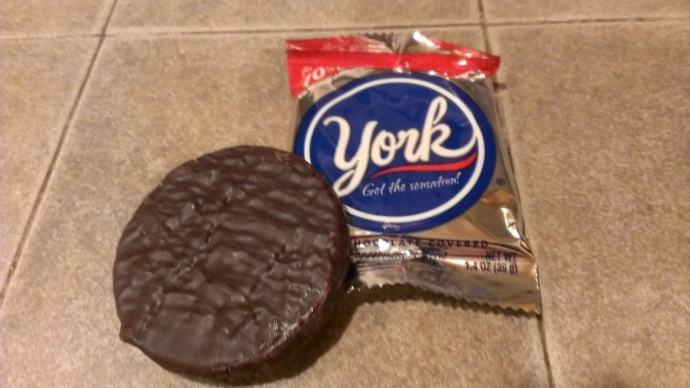