We would be pretty flaky if we failed to celebrate today’s food holiday, National Croissant Day!

Most people associate croissants with France. But unlike the Eiffel Tower, escargot, and Gerard Depardieu, croissants actually originated in Austria. The hills were alive with the sound of croissant bakers perfecting their craft as far back as the 13th century! It was called kipferl then, and came in different shapes and sizes, but the concept was the same: pastry dough layered with butter, rolled, and folded. The result is a flaky, buttery, layered pastry that can be either sweet or savory (whereas Mr. Depardieu is merely unsavory). Various legends state the croissant was invented in Europe in 732 to celebrate the defeat of the Umayyad forces by the Franks, with the shape representing the Islamic crescent; by the Viennese in 1683 to celebrate the Christian victory over the Ottomans in the siege of that city, the crescent a nod to the Ottoman flag; and by Gerard Depardieu, hungry for a snack that looked like a smile after yet another public relations disaster. Nobody knows the true source, but this much is clear: in 1839 August Zang, an Austrian soldier and baker, opened a bakery in Paris and introduced the City of Light to the crescent-shaped pastry. It was a match made in heaven.

I love croissants. Other than bananas, they are the only food that resembles a sliver of moon…and that makes them out of this world! (Insert canned laughter). Because a warm croissant for breakfast would have been too easy (and Tara and I are proving to be loathe to go the easy route, which may be to our own detriment as the year rolls on and these challenges pile up – even our East Coast culinary consultant, John, advises us to keep it as simple as possible), we decided to up the ante and order a croissant sandwich for lunch!! We are rebels, she and I. So we met up at Panera a little after noon. I laughed when I saw their menu advertising a “French croissant.” But then I remembered that, up until this morning, I too thought that croissants were French. This experience has been an eye-opener, that’s for sure.  I ordered a turkey avocado BLT and had them make it on a croissant instead of the usual bread. It was, as the French say, “c’est magnifique!”

No idea what they say in Vienna… 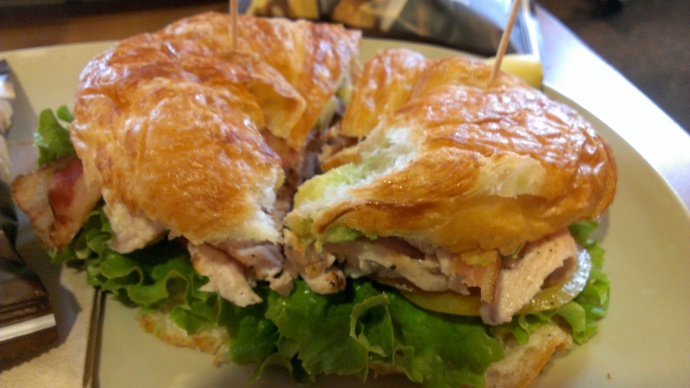