It’s National Corn Chip Day, so tear open a bag of Fritos and get wild! That’s what we did. Minus the “get wild” part.

Many people confuse corn chips with tortilla chips, but they are in reality quite different. Both are made from corn, but tortilla chips go through a process called nixtamalization (the corn is soaked and cooked in an alkaline solution before being hulled, resulting in a milder flavor and less crunch). Think of them as being neutered, if you will. (Or don’t. You may lose your appetite). Tortilla chips are bigger and thinner, while corn chips are thick and crunchy, and taste strongly of corn. Gee, no kidding.

In 1932, Charles Elmer Doolin owned a convenience store, but there was nothing convenient about it: the tortillas he kept stacked on the shelves kept spoiling. It was the height of the Depression, and Doolin could ill afford to let his food go to waste. He met a guy from San Antonio who was selling fried corn chips, and offered him $100 for the recipe; his mother, Daisy, pawned her wedding ring to come up with the cash. C.E. (as he was called) got to work, experimenting with different varieties of corn until he found the perfect strand – a type of corn he grew himself. Daisy loved to whip up new recipes for the corn chips, and one day tossed a handful into a pot of chili, creating the Fritos Chili Pie, which is pretty much the National Dish of Rednecks everywhere. Doolin went on to form The Frito Company and other inventions followed, including Cheetos in 1948. In 1961, he merged with H.W. Lay & Company, and Frito-Lay has been a powerhouse in the snacking industry ever since.

I love Fritos and bean dip, but somebody isn’t a fan of beans around here. Cheese dip is good, but too obvious. And we don’t skin our own squirrels for breakfast, so Chili Pie was out. I happen to have an excellent recipe for a Fritos Corn Salad that I got from somebody I used to work with. She would make this for office potlucks, and it was always a big hit – the one item that disappeared faster than anything else (even cocktail wienies!) and people were always wanting the recipe for. Tara was skeptical – a lot of people are, I guess given what seems like an odd combination of ingredients – but it’s really, really good. Trust me. I made it for a family function a couple of years ago, and my aunt demanded the recipe. Now she makes it any time she’s got a potluck, and people hit her up for the recipe. It’s the circle of life, I tell you.

Simply mix all the ingredients in a large bowl, adding the Fritos right before serving. The Chili Cheese work best, but you could substitute regular if you’re afraid of a little kick (it’s pretty mild, actually).

I made it tonight to go along with hot dogs, and of course it was a big hit. Even Tara liked it! 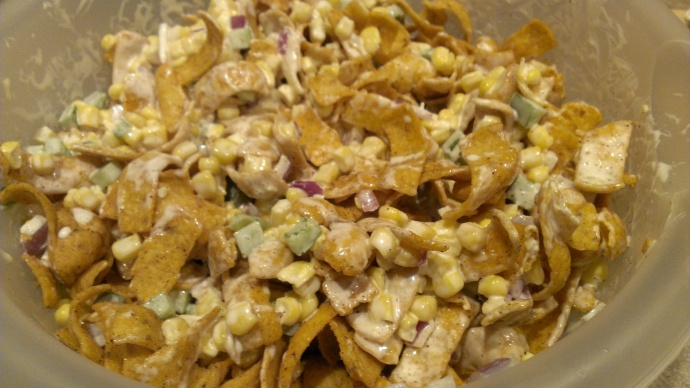