People often use the terms “corn chips” and “tortilla chips” interchangeably, but as I explained during National Corn Chip Day last month, there is a difference: though both are made from corn, tortilla chips go through a process called nixtamalization, in which they are soaked and cooked in an alkaline solution such as quicklime, making them thinner and crispier. This process was first developed by the ancient Aztecs and, while I could go into a long and scientific explanation over how it is crucial in converting bound niacin to free niacin and preventing a vitamin deficiency disease called pelagra, I’d probably just scare you away from Fritos, which do not go through the same process, and I don’t want to do that because corn chips are tasty, too! Credit for the invention of tortilla chips goes to Rebecca Webb Carranza, who owned a tortilla factory with her husband in Los Angeles. Tired of the tortillas rejected by the automated tortilla manufacturing machine going to waste, she took these scraps, cut them into triangular shapes after her first choice – pentagrams – proved too controversial and her second choice, octagons, too complicated. She fried them up and sold them for ten cents a bag. In 1994, Carranza received the prestigious Golden Tortilla Award for her contribution to the Mexican food industry. Just a few decades ago tortilla chips were rarely eaten, but they gained popularity in the 1970s and now are as ubiquitous in Mexican restaurants as sombreros hanging on the walls and piped-in mariachi music. They are typically served with a dip such as salsa, guacamole, or lime jello, or turned into nachos. Tortilla chips are usually made with yellow or white corn, though blue and red corn varieties also exist. Beware the green corn tortilla chips: that’s just mold, amigo. You should toss those ASAP.

For today’s celebration, Tara and I enjoyed a late afternoon snack of corn chips with salsa and queso. It doesn’t get much easier than that! 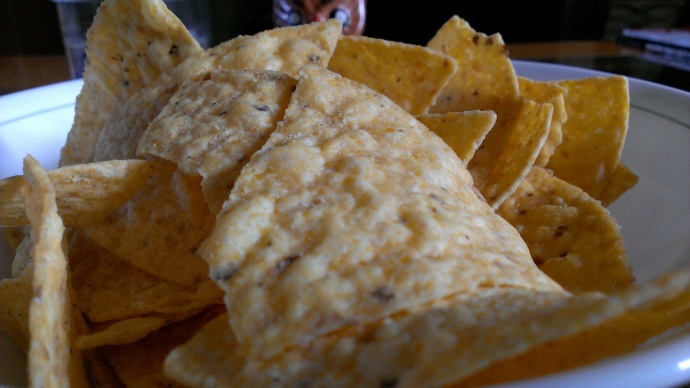