We could have taken the easy way out today. There are two food holidays celebrated on January 24th, and one of them is peanut butter. This would have required little effort on our part, but Tara was adamant we make lobster thermidor instead. I’m glad I listened to her, too. One of the goals of this challenge is to try foods we’d never had before. A month ago I’d never tasted curried chicken or hot buttered rum and Tara had never tried Peking duck, and it’s fun to expand our culinary horizons. Lobster thermidor is a complicated dish requiring quite a bit of preparation, but with a few shortcuts – it’s almost impossible to find whole lobster out here, so we had to substitute lobster tails – we ended up with a dish that was very good, and new to us both!

Lobster Thermidor was invented by a Paris restaurant named Marie’s in 1894, in honor of the play Thermidor, a tale of the French Revolution. “Thermidor” is also the eleventh month in the French Revolutionary calendar, occurring from July 19-August 17, and means “month of heat.” You have to love the French language: every word sounds beautiful. Lobster Thermidor could very well have been called Lobster Brumaire (second month) or Lobster  Pluviôse (fifth month). Or, for that matter, Lobster Beret or Lobster Peugeot.

The French sure love cooking foods with shells, but I’ve gotta say lobsters are a lot more appealing than snails. Did you know that they are one of the few creatures that don’t slow down or weaken as they age and, in fact, are more fertile the older they are? Lobsters are the Hugh Hefners of the deep! Like tortoises, mussels, and Quahog clams, they can live for hundreds of years. In fact, some scientists believe that barring injury, disease, predation, and clarified butter, lobsters could in theory live indefinitely.

Somebody needs to invent a pill…

Our poor lobsters were not so fortunate. But boy, were they tasty! Thank you, Rachael Ray, for this recipe utilizing lobster tails. Interesting preparation: you remove the meat from the shells, saute it in butter with onions, shallots, mushrooms, milk and cheese, and then stuff it back in the shells, top with bread crumbs, and broil for about 5 minutes. Dinner was fantastic! And with candles, wine, and jazz records, very romantic. 🙂 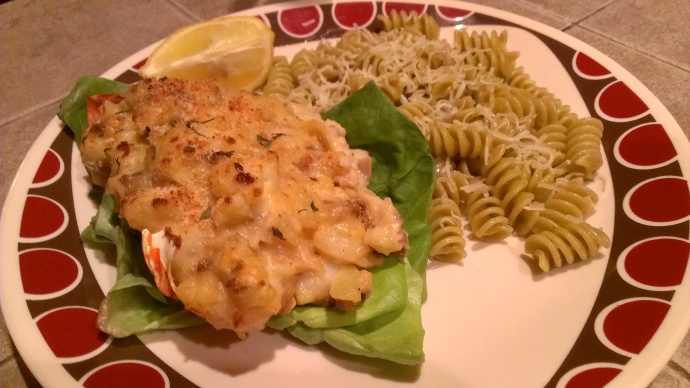