If you’re a lawyer in the tropics, then today is right up your alley: it’s National Coconut Torte Day! (Torte…tort…a case in which damage, injury, or a wrongful act was done willingly or negligently…okay, this joke was a stretch). The truth is, I never really knew what a torte was before today’s challenge. I thought it was a pie-like pastry, but Tara informed me that’s a tart. Talk about confusing! As it turns out, a torte is a fancy name for a multilayered cake.

Multilayered cakes date back centuries. In fact, the oldest known cake in the world was a Linzer Torte, an Austrian confection with a lattice top and a funny accent. Originally made in the town of Linz, Austria, the cake can be traced back to 1653 thanks to a recipe discovered in an abbey in Vienna in 2005. In the 1850s an Austrian tourist brought the recipe to Milwaukee, a city best known for beer, cheese, and Laverne & Shirley. From there, its popularity spread across the U.S.

If you’ve been reading this blog the past few days, you’ll know that I have recently learned that I do, in fact, have some baking skills. I found a recipe for a coconut torte that seemed easy enough (though perhaps a little too easy, as it was basically a box of white cake mix and a frosting made of sour cream, Cool Whip, sugar, and coconut). I can’t say it was difficult to make, though I did have to knock on my neighbor’s door after dark and borrow the sugar. She’s so used to me doing that, when she opened the door and saw me standing on her doorstep the first words out of her mouth were, “Do you need eggs or sugar?” So I’m giving a special shout-out to Andrea, who saved our coconut torte!

We brought it over to my parents’ house to share after dinner. And guess what? It got rave reviews! The first cake I’ve ever baked in my life turned out to be a rousing success. 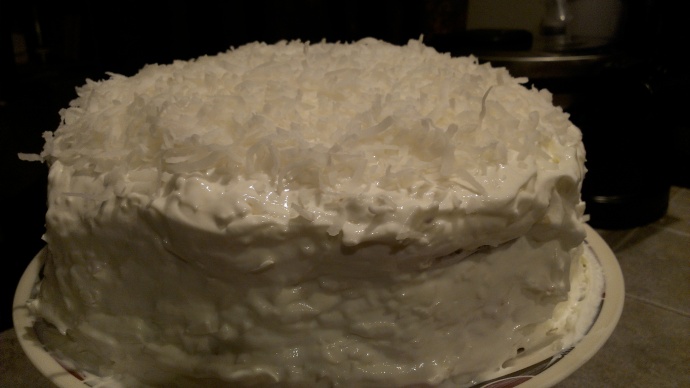