If you’re feeling salty, your mood is sure to improve today. We celebrate one of the most popular snack foods in America: it’s National Potato Chip Day! 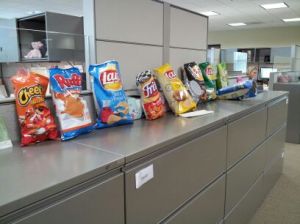 Tara’s employer got in on the action today!

Potato chips actually started out as a joke. One evening in August, 1853, a diner at a restaurant in Saratoga Springs, New York was unhappy with his meal. He complained that his potatoes were too thick, soggy, and bland, and kept sending them back to the chef, George Crum. After trying to appease the customer several times (and probably hawking a loogie in his food at some point), Crum had had enough. He decided to slice the potatoes as thinly as possible, fry them until they were crisp, and season them with extra salt. The trick backfired when the customer loved them, and suddenly the restaurant had a new hit item on their menu called Saratoga Chips. In 1910, Mike-sells Potato Chip Company in Dayton, Ohio became the first company to mass-market and sell potato chips. Back then, they were sold in barrels and tins or scooped out of bins. California entrepreneur Laura Scudder developed a wax bag to fill with potato chips at her factory, a revolutionary invention that kept them fresh and crispy longer. Flavored potato chips were developed in the 1950s by Joe “Spud” Murphy of the Tayto company, who came up with Cheese & Onion and Salt & Vinegar flavors. Flavored chips became an overnight sensation, and Murphy became filthy stinkin’ rich. Nowadays there are dozens of potato chip flavors, including Chicken & Waffles. Really, Lay’s?! But that’s not unusual compared with flavors found in other parts of the world, like Canada (Ballpark Hot Dog, Greek Feta & Olive); Japan (Scallop With Butter, Mayonnaise); and the United Kingdom (Prawn Cocktail, Lamb & Mint, Sausage & Ketchup, Stilton & Cranberry).

For our challenge, we stuck with regular ol’ original Lay’s. They may not be exotic, but they are dependably salty, crispy, and delicious! 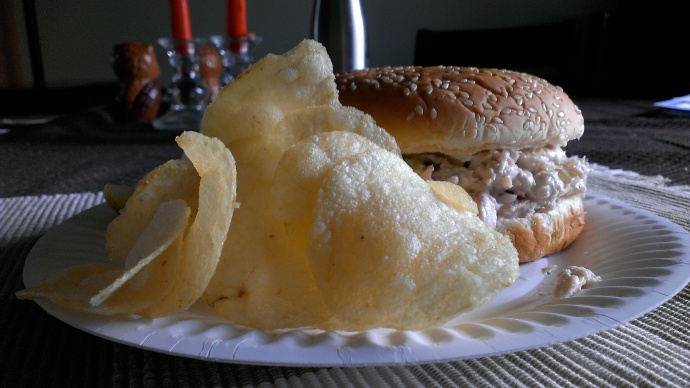