Take today’s food holiday with a grain of salt. Or, more accurately, a grain of rice. November 29 is National Rice Cake Day!

It is also National Lemon Cream Pie Day, but if you’re like us, you had plenty of pie yesterday to tide you over for awhile. In fact, you’ve probably still got leftovers today. A light, tasty, low-calorie and low-fat rice cake sounds much more appealing on Black Friday!

Rice cakes are very popular in Asian culture. They may be made with rice flour, ground rice, or whole grains of rice compressed together. Rice cakes can be sweet or savory, and are available in a variety of flavors. Rice has been cultivated for over 7000 years, and is primarily grown in warm, humid climates. In Pacific Rim countries especially, rice is the basis for many meals and snacks. Sweet rice cakes called mochi were eaten by Japanese nobility as far back as the 8th century, and really began to flourish by the end of the 12th century. Once Tokyo became the capital of Japan during the Edo Period (1601-1868), rice cakes became a popular festival treat, and began appearing at roadside stands throughout the country. To this day, many Asian street vendors sell variations of rice cakes made with vegetables, seaweed, and seafood that are fried to order. In the U.S., puffed rice cakes are common. These are considerably healthier, and are a popular low-calorie substitute for pastries.

We picked up a bag of white cheddar flavored rice cakes to celebrate. This is my favorite flavor; I often enjoy rice cakes for a snack, and today was no exception! 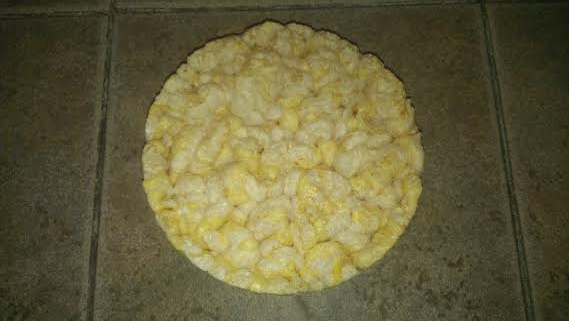 International Sushi Day is a relatively new food holiday, having been created in 2009 after a successful Facebook campaign. I may just have to start a page to promote National Ketchup Day, which – as I’ve mentioned – does not exist. There’s something fishy about that, let me tell you.

Anyway. Today is also National Cherry Tart Day and International Picnic Day. We chose to celebrate sushi because A. we are sick of desserts, and B. we have to work, and the weather might be showery this evening, so a picnic isn’t in the cards. Besides, I love sushi! Tara does not…but when has that ever stopped us?

Sushi dates back to the 4th century B.C. in Southeast Asia. When fish were caught they were cleaned, gutted, and salted, and wrapped in rice; the natural fermentation of the rice acted as a preservative to keep the fish edible for months. When ready to eat, the rice was discarded. Sushi was introduced to Japan in the 8th century A.D. The Japanese liked to eat rice with their fish, which was still partially raw, so instead of a method of preparation, sushi became a meal itself. They began mixing vinegar in with the rice to recreate the tangy flavor without having to wait for fermentation to occur. Vegetables and other preserved foods were added to the mix, with each region of Japan relying on local ingredients to create specialized recipes. By the 19th century sushi had evolved to include fresh fish and seaweed, and finally resembled the dish we are familiar with today. Sushi didn’t appear in the West until much later. In 1953, Japan’s Prince Akihito introduced sushi to Britain and America (it was served at the Japanese Embassy in Washington, D.C.). During the 1970s Japanese businesses began expanding to the U.S., and sushi restaurants were opened to cater to their tastes. Sushi was a tough sell in America – few people could stomach the idea of eating raw fish – so the California roll was developed, consisting of cucumber, (cooked) crabmeat, and avocado. This was the perfect introductory vehicle for the American palate, and allowed people to gradually experiment with other types of sushi, notably raw fish. Sushi gained popularity in the U.S. during the health-conscious 1980s, and nowadays is a very popular dish both here and abroad.

We’re fortunate, because Fred Meyer – our local grocery-slash-everything-else-store, has a very good sushi bar. I go there often for a quick, tasty, and healthy lunch.

January 7th is National Tempura Day, which may seem like an odd choice for an American food holiday. But tempura actually refers to the Japanese method of frying vegetables and seafood, and is not an actual Japanese dish like sushi or udon. In fact, the foods we cooked tonight were all distinctly American (and the side dish, Chinese). But more on that later.

Tempura didn’t even originate in Japan. Jesuit missionaries from Portugal introduced it to the Japanese in the 16th century, while visiting Nagasaki. They also brought over panko and tonkatsu (though the Japanese are responsible for origami, haiku, and vending machines that dispense everything from live crabs to soiled panties). Tempura is derived from the Latin word tempore, which means “time period” and refers to Ember Days, holy days in which Catholics eschew meat in favor of fish and vegetables. Regardless of where it came from, the Japanese took to tempura like a fat kid to cake, dipping everything they could find in batter and deep frying it in hot oil.

By the way, one week in and we are beginning to get a feel for things. We’ve learned some lessons already: preparation is key, and do not take the easy way out. While we’re still finding our rhythm, I think from this point on you’ll start seeing us stretch ourselves a little bit more.

Back to tempura. I’d actually been craving it for some time, and had mentioned making it for Tara a while ago. I’ve owned a deep fryer for years (though using it remains a novelty), and I know from experience that tempura isn’t a complicated dish to make. We picked up a bunch of veggies – onions, mushrooms, yam, and zucchini – and a few large prawns. Those, a box of tempura batter and a bottle of dipping sauce, and we were all set. Tara’s not a fan of white rice, so she suggested we make fried rice to go along with it. Cross-cultural culinary conflict aside, I was game. She said she’d “pick up the packet” from the store on her way home, and I just looked at her. Packet? What packet?? Fried rice is easy enough to make without any preservative-laden help. But I feel I should offer her the chance for a rebuttal here.

Here’s another one I’m never going to live down…  In my defense, I’ve never cooked fried rice and the one and only time it’s been cooked for me at home was just last year, and compliments of my dad.  He did use one of those seasoning packets, along with the requisite diced ham, onions, eggs, and peas.  It must’ve been all those preservatives Mark mentioned that made it taste so good.

On paper, tempura is easy to make. Pour the oil in the fryer, heat it to around 350 degrees, combine the tempura mix with ice water to form a batter (the colder the better – this prevents the batter from absorbing too much oil and leads to a crispier coating), dip, fry until golden brown, and voila! You’ve got yourself something hot, crispy, and authentically Portugese. The reality is a little different, however. You have batter dripping all over the counter and floor and sticking to your arms (where you don’t discover it until later, when it’s good and dry), and the house smells like fried oil for 48 hours afterwards. But at least it tasted good!

Especially when Tara has to clean up the mess. 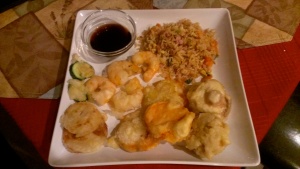