I’ve got a sticky proposition for you: how’s about you come help us celebrate today’s food holiday? December 17 is National Maple Syrup Day!

By maple syrup, I don’t mean Aunt Jemimah or Mrs. Butterworth. We’re talking real maple syrup – the sap from maple trees (usually sugar, red, or black maples). These species store starch in their trunks and roots; this is converted to sugar that rises in the sap during springtime. The trees can be tapped by boring holes in the trunks and the sap harvested; this is then processed to evaporate most of the water, leaving the concentrated sap behind. European settlers learned this trick from Native Americans, who were the first to collect and use maple syrup in this fashion. Originally used as a concentrated form of sugar, maple syrup became a popular topping for pancakes, waffles, and french toast, and is used to flavor everything from fritters and ice cream to fruit, sausages, baked beans, squash, and hot toddies.

To be classified as true maple syrup in the United States, the product must be made almost entirely from maple sap. A number of less expensive imitation syrups sprung up over the years, giving consumers the flavor of maple without the cost. By law, these cannot be labeled as maple syrup but are called, instead, “waffle syrup,” “pancake syrup,” “table syrup,” etc. They are usually made with high-fructose corn syrup and artificial flavors, are artificially thickened, and contain no real maple. As much as I enjoy Log Cabin, it’s not really maple syrup at all. A Rhode Island man was recently sentenced to two years probation for trying to pass off an imitation syrup as genuine maple syrup.

With such a strong emphasis on what constitutes genuine maple syrup, there was no doubt we would have to buy a bottle of the real stuff to complete today’s challenge. Which we did. Tara got up early to make us pumpkin pancakes (another wonderful Trader Joe’s find this season). Topped with real maple syrup, they were a sweet and filling start to the day! 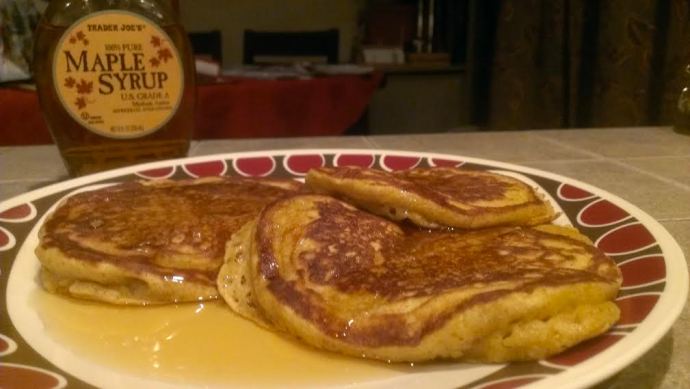