If you’re cuckoo for cocoa, then today’s your day. July 28 is National Milk Chocolate Day!

Chocolate is one of those things we’ve celebrated many times already this year, and I’ve talked about its history more than once. I’m too lazy to link to those various posts, but a quick Google search under “chocolate eat my words” (or a similar combination) brings up links to multiple chocolate-flavored posts we’ve already published. Be careful, though: a similar search brings up a 9-step process on How To Eat Chocolate Seductively (#3: Unwrap the chocolate bar or box with a gleam in your eye and a sense of purpose. #5: Place your tongue on the chocolate first. Oh, the hilarity).

There are different varieties of chocolate, of course, and milk chocolate – while not as hip or trendy as dark chocolate these days – still holds a special place in many people’s hearts. It’s a sweet chocolate that contains milk powder or condensed milk, and is undeniably creamy and wonderful. In 1867, Swiss candlemaker Daniel Peter, who had recently started working in his father-in-law’s chocolate business,  experimented with adding milk to chocolate in order to create a creamier product. Milk contains water, which makes chocolate separate and disintegrate, so Daniel tinkered with his recipe for eight years before bringing it to his friend and neighbor, Henri Nestlé, whose company had perfected the manufacturing of condensed milk for its line of baby food products. By adding Henri’s sweetened condensed milk to Daniel’s chocolate, they successfully created a milk chocolate that stayed together and tasted delicious. You no doubt recognize the Nestlé name, and are well aware of its dominance in the world of milk chocolate. You can thank Daniel Peter for that.

To celebrate, we broke out a leftover Hershey’s chocolate bar from our camping trip last weekend. Nothing says milk chocolate like Hershey’s! 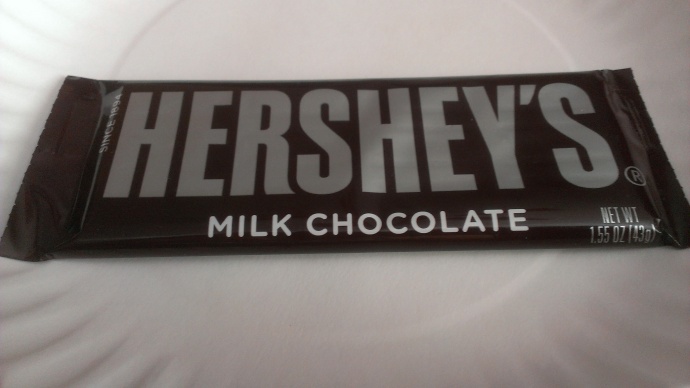 It’s National Bittersweet Chocolate Day, and upon learning this, my first question was: what in the heck is bittersweet chocolate? The answer, my friends, is blowing in the wind. And also on the internet. Chocolate is broken down into different categories based on the amount of fat it contains. Chocolate starts out as “chocolate liquor,” which is simply pure chocolate in liquid form. Sugar and a fat, such as cocoa butter, are added to this substance. To be classified as bittersweet, chocolate must contain a minimum of 35% chocolate liquor. The rest is cocoa butter, sugar, vanilla, and an emulsifier.

My second question was: what in the heck is an emulsifier? But then I figured the science was getting too intense, and I should just appreciate the chocolate for what it is. Which is, delicious! Who doesn’t like chocolate?!

Chocolate dates back to ancient times. The Mayans, when they weren’t assembling calendars meant to freak out otherwise highly advanced 21st-century people who falsely interpreted them as “the end of the world is coming!” warnings, were busy growing cacao trees in their backyards. They used the seeds to concoct a frothy and bitter beverage, an early precursor to Yoohoo. The Aztecs took over Mesoamerica, started adding spices like chile peppers and achiote to chocolate, and made sacrificial chocolate offerings to Xochiquetzal (pronounced Beverly), the goddess of fertility. Ever since, women have been craving the stuff during a certain time of the month. Coincidence? You be the judge. Europeans got their first taste of chocolate in the 16th century, and by 1839 had invented the modern-day chocolate bar. It only took them 200 years to figure out how to solidify it! Milk was added in 1875 by a Swiss candlemaker and his neighbor, Henri Nestle. Rodolphe Lindt figured out how to easily blend liquid chocolate, paving the way for Milton Hershey to mass produce affordable chocolate bars. 132 years later, Tay Zonday went viral with “Chocolate Rain.” 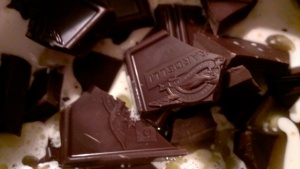 Yeah, that’s Ghirardelli. We roll with the best around here!

I’ve always been partial to milk chocolate, which contains only 10% chocolate liquor. Tara’s a dark chocolate fan, and it doesn’t get much darker than bittersweet chocolate, which is most often used in baking – its bitterness cuts down on the sweetness inherent in sugary desserts. Tara has a recipe for brownies with a chocolate ganache (check it out here), so she took a couple of bittersweet chocolate bars, melted them down with some half-and-half and butter, and poured them over the brownies. “The chocolate is melted,” I said, once it had blended in with the ganache mixture. “That’s kind of bittersweet.”

Cracking food jokes is part of the fun. And the brownies were delicious with coffee.

Oh, and our coworkers are loving this project, because they’re ending up with all the leftovers! Well, the sweet leftovers. The beans, not so much.