Pfeffernuesse is a small, round cookie with ground nuts and spices that is popular during the holidays in Germany, Denmark, and The Netherlands. The dough is rolled into balls and is initially hard, leading many to dunk the cookies in coffee or milk, similar to a biscotti. Over time, they soften. The name translates to “pepper nuts” in English, though these cookies do not always contain nuts. A National Pfeffernuesse Day is observed by many European countries on the same date.

In Dutch folklore, Pfeffernuesse is closely associated with the Feast of Sinterklaas (December 5 in The Netherlands, December 6 in Germany and Belgium). Children receive gifts (or lumps of coal, depending on whether they’ve been precious little saints all year, or assholes) from St. Nicholas on this day. The cookie has been a part of these European yuletide celebrations since the 1850s.

Pfeffernuesse are one of those cookies you’d recognize if you saw it. Sure enough, they’ve been a part of many a holiday cookie tray over the years. I couldn’t find them in the grocery store, so I looked up several recipes online – the basic ingredients are the same, but the exact spices vary – and ended up combining elements from a couple of different recipes to create my own. Here it is:

The verdict? These were different from any other type of cookie I’ve ever had. They’re warm and spicy, with just the subtlest hint of pepper. The color and consistency – and flavor, even – reminds me somewhat of gingerbread. They were pretty good!

And I might also point out, these represent the final baking challenge of the year. There is nothing else left to bake, and actually, only 1 more thing left to cook. Wow! 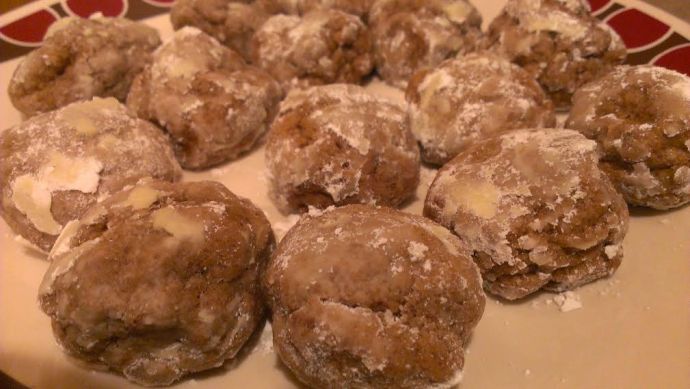 Today’s food challenge is one of the wurst yet. And I mean that in a good way. August 16 is National Bratwurst Day! But yo-ho-ho, that’s not all: it’s also National Rum Day. Unfortunately, we’re making an impromptu trip to Ely, Nevada due to a death in Tara’s family. It’s about a 12-hour drive, and obviously alcohol would be a bad idea. Eating bratwursts before hitting the road at 4 AM is tricky enough!

Bratwurst is one of the oldest sausages, dating back to the early 14th century. It is, not at all surprisingly, a German invention (they do love their sausages, don’t they?), derived from the words braten (to “fry”) and wurst (opposite of “best”) (or, in this case, “sausage”). Bratwurst is made of ground pork, beef, or veal, and a distinctive blend of seasons that includes nutmeg, garlic, salt, and pepper. The earliest evidence of this wiener on steroids dates to 1313 and the German town of Nuremberg, still a major sausage manufacturing region to this day. It is typically grilled or pan fried, and often served with sauerkraut or potato salad. German immigrants introduced it to the U.S., and it’s particularly popular in the state of Wisconsin, where (stereotype alert!) locals wearing giant foam cheese heads and speaking in funny accents often cook it in beer. Brats, as they are commonly referred (hey – just like kids!), are so popular in Wisconsin that Miller Park in Milwaukee is the only baseball stadium in the country that sells more bratwursts than hot dogs, and the city of Madison’s three-day Brat Fest over Memorial Day weekend is billed as the largest in the world. Take that, Germany!

We said at the beginning of this project that regardless of circumstances, we would stick with our food challenge, no matter how difficult. Certainly today is one of those days to test our limits, but with a little bit of preparation, we made do. This meant cooking bratwursts the night before and eating them early in the morning, long before the sun was up, with scrambled eggs…and relying on technology to make sure this post appears while we are somewhere in the middle of nowhere (a/k/a Idaho). Is that dedication, or what? 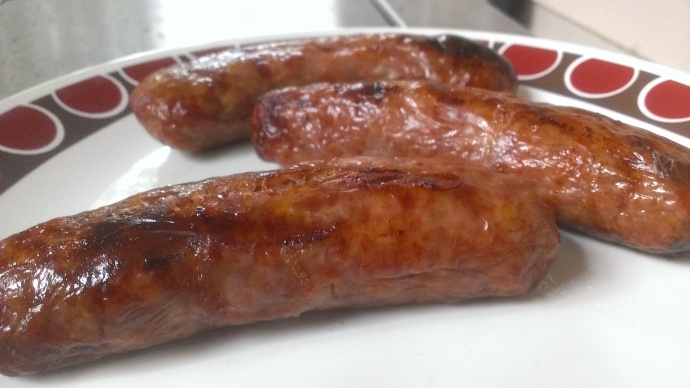 You want the truth, the hole truth, and nothing but the truth? You got it: June 8 is National Jelly-Filled Doughnut Day!

This comes on the heels of National Doughnut Day, which was yesterday. There may be much less freedom of choice today, but it doesn’t mean the doughnuts aren’t still delicious, even if they are filled with jelly instead of topped with bacon, as we are fond of doing around these here parts.

The first reference to a jelly doughnut appears in a German cookbook from 1485, Kuchenmeisterei (which translates to “Mastery of the Kitchen”). Called Gefüllte Krapfen (“Gefilte fish taste like crap so eat something sweet instead”), the recipe called for jam sandwiched between two round slices of yeast bread dough and deep fried in lard. This was a bit of a revelation; at that time most filled doughnuts were stuffed with meat, cheese, fish, or mushrooms. Sugar was exorbitantly expensive, so savory foods just made economical sense. When Caribbean sugar plantations opened in the 16th century, the price of sugar dropped to affordable levels, and people were able to create inexpensive fruit preserves. Since a jelly-filled doughnut tastes a heck of a lot better than a doughnut stuffed with, say, trout or gouda (well, presumably, but who am I to say for sure?), sweet filled doughnuts surpassed savory doughnuts in terms of popularity. Still, they were considered a treat reserved for special occasions until the 18th century, when a crafty German invented a metal pastry syringe that enabled bakers to directly inject jelly into doughnuts that had already been fried. By the 20th century, machines further automated the process, and the mass production of jelly doughnuts began in earnest. Known as “Berliners” or “Bismarcks” after their German heritage, jelly doughnuts remain a popular treat around the world today. (Personally, I’m fond of the Manitoba name for these fried pastries, “jam busters”).

To celebrate jelly-filled doughnut day, we grabbed a raspberry filled doughnut from the corner doughnut shop. It was the perfect fuel for our first hike of the season!