Why did the chicken cross the road? To avoid fowl play and escape the stewpot, of course. No such luck today. November 12 is National Chicken Soup for the Soul Day!

It’s also National Pizza With Everything (Except Anchovies) Day. Two cleverly named food holidays, both of them promising tasty dinners. We had us a real dilemma deciding which one to celebrate. Seeing that it’s a weekday our initial thought was ordering a pizza with everything except anchovies, but we’ve already gone the pizza route twice, while few soups have popped up on the menu. There was split pea soup a few days ago, of course. But other than that, just turkey neck soup, way back in March. Chowders and bisques don’t count. Considering that nothing satisfies on a cool, crisp autumn evening like a bowl of piping hot soup, this turned out to be a pretty easy decision, after all.

Chicken Soup For The Soul is the name of a series of popular inspirational books first published in 1993. The name was chosen because chicken soup is a popular home remedy for the sick, and is therefore good for the body – while the inspirational stories within are meant to be good for the soul. This is one of the few food holidays with corporate sponsorship; Chicken Soup For The Soul Enterprises, Inc. pushed for the holiday as a means to celebrate eating chicken soup as well as “who you are, where you’ve been, where you’re going and who you will be thankful to when you get there.” Which almost makes me want to roll my eyes, but I am thankful for chicken soup, so I’ll check my cynicism at the door.

Chicken soup has been enjoyed by many cultures for hundreds of years. In Colonial America, chickens were mainly raised for their eggs; when hens grew old, their meat was stringy, and they were considered too tough for roasting, so they were used in soup instead. Chicken noodle soup is a popular variation in the U.S., but almost never came to be: Campbell’s was preparing to discontinue its “chicken with noodles soup” due to poor sales when an announcer slipped up during a live commercial airing during The Amos and Andy Show and referred to it as “chicken noodle soup.” This simple mistake generated a ton of interest, and people wrote letters to Campbell’s asking about the new flavor. It has been one of their top-sellers ever since. Chicken soup has long been associated as a cure for the common cold, and a 2000 study by the University of Nebraska Medical Center in Omaha actually found anti-inflammatory properties in chicken soup, which means eating it while sick could hypothetically lead to a reduction in symptoms, lending credence to what many had considered an old wive’s tale.

To celebrate, Tara made chicken noodle soup. From scratch. Including the noodles. How impressive is that? This is a creamy version that was a childhood favorite; she hadn’t had it in roughly 2o years. Until this past Saturday night, when her mom Tracy made it for us. It was so delicious, we decided to take advantage of the holiday and have it again today. Absolutely yummy!

For some reason, there are a few duplicate food holidays. I don’t get it: with so many great foods left uncelebrated – can you believe there’s no National Ketchup Day, for instance?! – it’s weird that some foods get more than multiple holidays. Especially something so random and specific as National Coq au Vin Day, which is also celebrated on March 22nd. We just encountered this with wine over the weekend, as there is both a National Wine Day and a National Drink Wine Day. It goes without saying that you’re going to drink it, right? What other option do you have, other than inserting an IV tube full of chardonnay into a vein? Which, come to think of it, would save you the trouble of pouring…

Anyway. The only explanation that I can come up with is, one of the Coq au Vin holidays is listed as a “National” day, and the other isn’t. What is especially frustrating is that I busted my ass in March, recreating Julia Childs’ signature dish for the challenge. And equally annoying? March 22nd was also National Water Day, which we chose to skip because, well, how hard is it to pour yourself a glass of water? That was before we realized there was a second National Coq au Vin Day, though.

As delicious as the dish was the first time around – and it was really good, one of our favorite food challenges to date – it was very time-consuming and required a ton of prep work. I just didn’t have it in me to do it again on a weeknight, so I turned to Trader Joe’s for help this time. They’ve got a frozen Coq au Vin that looked decent enough in the picture on the box. And most importantly, required virtually no prep other than preheating the oven and sticking it in there. So, if you want the history of Coq au Vin again, click on my link above.

And the Trader Joe’s version of this classic French dish? It was passable…but barely. After having that delicious homemade Coq au Vin last time, there was no way this could be anything other than a letdown. But, hey…at least it didn’t take a lot of work! 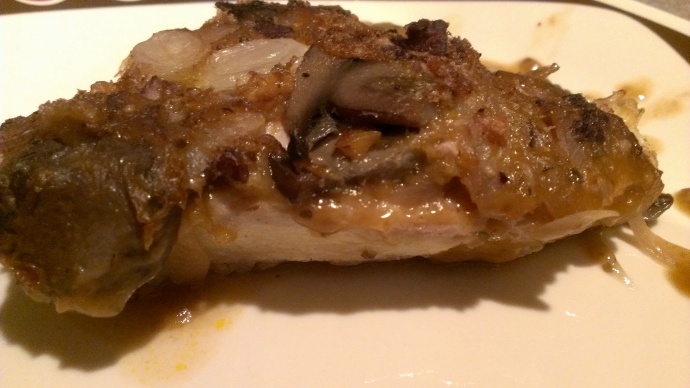 You’ll get a blue ribbon if you guess what today’s food holiday is! Give up? April 4th is National Cordon Bleu Day!

If you hadn’t already guessed, “cordon bleu” translates to blue ribbon in French. This scrumptious dish refers to a cutlet of meat – traditionally chicken, veal, or pork – that is pounded thin, stuffed with a slice of ham and a slice of cheese, breaded, and either baked or fried. It’s a relatively recent creation, and not even French, despite the hoity-toity name. A schnitzel with cheese first appeared in Switzerland (naturally) during the 1940s. The earliest mention of “cordon bleu” in America dates to a veal recipe in 1955, while the chicken version appeared in a New York Times article in 1967. A future version – “soylent green cordon bleu” – is expected in 2022. Don’t ask what’s in it. Sometimes prosciutto or bacon is substituted for the ham, and any soft cheese can be used. I’m partial to Swiss myself. I believe that’s the traditional cheese type used, probably in honor of the dish’s place of origin, but that theory could be full of holes.

I’ve made chicken cordon several times in the past, and had actually planned on cooking it for Tara soon anyway, so this food holiday gave me the perfect excuse. It’s easy to make, and the results are always delicious. I use this recipe from allrecipes.com, with a few minor variations (add paprika to the bread crumb mixture and coat the entire breast in it before cooking). Turned out great!

You’re a chicken if you don’t celebrate today’s food holiday, and you’d better duck or I’ll goose you, ya turkey! No need to cry fowl. In case you hadn’t guessed, March 19th is National Poultry Day.

Chicken is the most popular type of poultry, and accounts for 20% of the world’s protein. Descended from the Red Jungle Fowl, a small Southeast Asian pheasant, chickens (and ducks, geese, and pigeons) were first domesticated in China 3000 years ago. Surprisingly, they weren’t bred for their meat or eggs, but were used instead for cockfighting, a popular sport that spread throughout Asia and Europe. Little did they know how delicious those birds taste smothered in sweet ‘n sour sauce! Eventually, humans became too “civilized” to allow cockfighting to continue, and Colonel Harlan Sanders needed to go in a different direction to revive his fledgling Kentucky Fried Goat franchise, so a new use for poultry was discovered. Europe sent chickens to America and we gave them turkeys (by turkeys I mean large birds that are popular at Thanksgiving, not Ashton Kutcher films). Poultry became popular during World War II when other livestock were scarce, and new storage and distribution methods were developed. While chicken reigns supreme, turkey and duck are also popular, and there is even a trendy meal involving all three: the infamous turducken. Popularized, of course, by John Madden.

Had we thought of this sooner, we would have looked for a turducken. What better way to celebrate National Poultry Day, right? The possibilities were nearly endless already. There are hundreds of chicken and turkey recipes out there. Finally, we decided on chicken tacos, just because it had been awhile since we’d had Mexican food. What can I say? They were muy bien!

It’s nice when American food holidays pay homage to international cuisine. After celebrating tempura earlier in the week, today is National Curried Chicken Day! When many people hear the word “curry” they think spicy. And there are plenty of curry recipes that, like Dirty Harry, pack heat. But curry powder is a fairly tame blend of spices like turmeric, coriander, cumin, fenugreek, and red pepper. It’s got a warm, distinct scent and taste, and is what we used to make our curried chicken recipe today.

But today isn’t “curry” chicken day, it’s “curried” chicken day, and there is a difference. Curried chicken refers to the art of preparation – when you curry a chicken, you’re adding a mixture that includes curry to the chicken. Chicken curry, on the other hand, is made with a curry flavored sauce and typically cooked into a stew. Clear as mud, no?

Curried chicken is very popular in Southeast Asia, and most commonly associated with India. The word curry came from kari, an Indian/Sri Lankan term for meat and vegetables cooked with spices. Archaeologists have found mortars and pestles dating back to 2600 BC; these were used to ground spices such as mustard, fennel, cumin, and tamarind pods for flavoring meat. Members of the East India Trading Company (those guys again!) brought curry powder to Britain in the 17th century, where it was used to spice up leftovers. It proved a great way to liven up day-old bubbles and squeak! Curry has become such a staple in British cuisine that it’s a popular potato chip flavor and pizza topping. The 2013 Mini Cooper automobile features the Union Jack logo, dual racing stripes, and a curry-flavored steering wheel.

Today is a busy day for us. We’ve got an NFL playoff game to watch (go, Broncos!) and a birthday dinner for my dad this evening. Our best option for a curried chicken dish was lunch; I found a recipe for a curried chicken salad lettuce wrap featuring diced chicken, apples, red onion, garlic, mayo, sour cream, and curry powder. It was surprisingly delicious…so much so that we’re declaring this recipe a keeper! Tara isn’t even a fan of chicken salad in general, but loved this one. I think personally it’s been my favorite food challenge so far, and I love that we are expanding our food horizons with recipes we’d probably never even think of trying otherwise!