Warm, hearty, and comforting, soup is the perfect food for those chilly winter days. And since the groundhog saw his shadow and informed us we have six weeks of winter left, it’s especially fitting. We didn’t celebrate this holiday last year because mushrooms were on the plate, but we lucked out this year. February 4 is National Homemade Soup Day!

I say lucked out, because we didn’t plan this food challenge. I just happened to make a pot of homemade albondigas soup for dinner last night, and brought leftovers to work for lunch. It may be an accident, but hey, I’m going with it. I’ll take every opportunity I can to cross another food holiday off our official list!

Whether you’re enjoying a bouillon or consomme, a puree or a bisque, soup has been a part of the human diet for a very long time. Evidence dates back to 20,000 BC. Holy cow, were there even people back then?! Since waterproof containers were rare back then, liquid soups were cooked in either animal hides or baskets made of reed or bark, heated to boiling with hot rocks. Interestingly, the word restaurant means “physically restoring,” and was first used to describe a soup sold by 16th century French street vendors that purportedly was used as an antidote to physical exhaustion. In 1765, a shop was opened in Paris that specialized in these soups, and the term restaurant was used to describe eateries from that point forward. Dr. John T. Dorrance, a chemist with Campbell’s Soup Company, invented condensed soups in 1897; these canned soups allowed customers to simply add water and heat at home. Campbell’s remains popular to this day; the top three selling flavors are Tomato, Cream of Mushroom, and Chicken Noodle. Soup has been popularized in American culture thanks to people as diverse as Andy Warhol and the Soup Nazi, of Seinfeld fame.

Last night, I prepared a homemade albondigas soup. Albondigas is the Spanish word for meatball. Sure enough, this soup focuses on meatballs, cooked in a broth (I use beef, though many recipes call for chicken) with onion, tomato, carrots, celery, cilantro, and zucchini. A squirt of lime juice brings out the flavors. And, like many soups and stews, it’s better the next day, once the flavors have had time to meld together. My lunchtime bowl hit the spot! 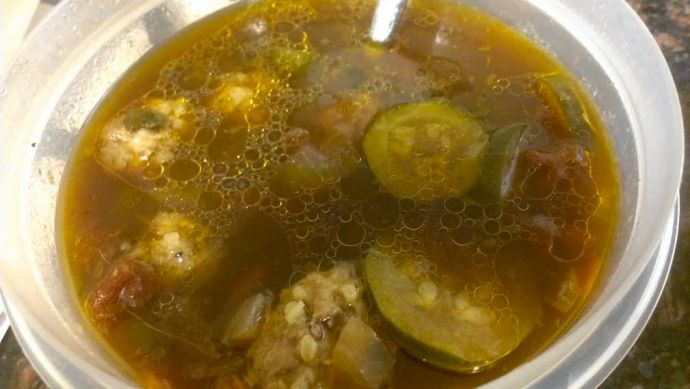