Even the most geometrically challenged will enjoy today’s food holiday, so long as they like pasta. December 11 is National Noodle Ring Day!

I was thinking noodle rings referred to those cans of miniature ring-shaped pasta otherwise known as Spaghetti-Os. But actually, they refer to a literal ring, or circle, of noodles. This dish, popular in the middle of the 20th century, was made by mixing noodles with ingredients such as eggs, ketchup, worcestershire sauce, and cheese, and putting the ingredients into a ring mold to bake. When it’s finished the dish is inverted, and the center can be filled with vegetables or main dishes. Creamed chicken was particularly popular. There were lots of variations, with some pretty outlandish ingredients. Who buys pimentos anymore? This recipe has pretty much disappeared from modern cookbooks, probably because serving a dinner shaped like a tire isn’t as appealing as it once was.

As much as I love all things retro, there is a reason certain vintage recipes have fallen out of favor, and that most likely has to do with the fact that they are what we might refer to as “disgusting” by modern culinary standards. Take this recipe, for instance. I have no idea what “dry” American cheese is, but do I really want to find out? No.

So, we improvised. We still made a noodle ring, but used Tara’s tuna noodle casserole recipe. And you know what? This turned out delicious!

It was probably the crumbled Lay’s potato chips she sprinkles on top. 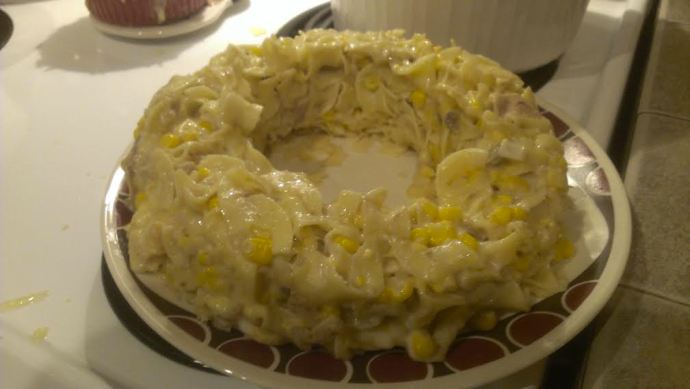