You’ll keep the doctor far away if you adhere to today’s food challenge. December 1 is National Eat a Red Apple Day!

Now that it’s December, we officially have only one month left in our food challenge! Time flies, huh? I’m beginning to think we just might pull this whole thing off. Knock on wood, of course.

When it comes to apples, red ones are among my favorites (though green ones have their charms, as well). We are fortunate enough to live in Washington state, by far the largest apple producer in the country. Approximately 59% of apples in the U.S. are grown here, followed by New York (10%), Michigan (8%), Pennsylvania (5%), and California (4%). As a result, I think I’ve become really picky over my apples. Red Delicious apples are certainly red, but anything but delicious. They are simply way overrated. If I’m shopping in the supermarket, I prefer Gala or Honeycrisp apples; otherwise, I’m partial to some heirloom varieties you can find up here, particularly Spitzenburg (which has the distinction of being Thomas Jefferson’s favorite apple). This year, I discovered a relatively new apple, the Crimson Crisp. We used one as the base for our caramel apple on Halloween.

Unfortunately, our crimson crisp apples are long gone, but finding a red apple in Washington in December is not a difficult task. I chose a Gala apple, while Tara went with a Red Delicious (despite my protestations). Hey, to each their own. I enjoyed my apple while watching the Broncos beat the Chiefs. That’s a win/win in my book! 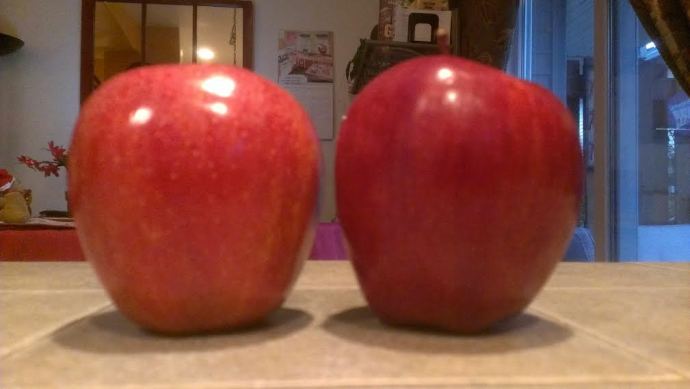