All we are saying is give peas a chance. Especially today: November 9 is National Split Pea Soup Day!

It’s also National Scrapple Day. If you’re wondering what the heck scrapple is, so was I. I’m almost afraid I bothered to look it up. Apparently, scrapple is a loaf of meat made with the scraps left over from butchering hogs. Spices and buckwheat flour are added to the pork fat and trimmings, and the whole thing is poured into a loaf pan to chill and take on a semi-solid congealed texture. Later, it’s sliced and fried, and this “delicacy” – popular in the Mid-Atlantic states – is panfried and served with ketchup, jelly, honey, mustard, or syrup. It’s considered a traditional meal of the Pennsylvania Dutch and Amish. And people give me a hard time for liking Spam! {Shudder}. What a shame scrapple is pretty much impossible to find out here on the West Coast. Of course, some people (cough*Tara*cough) don’t consider split pea soup much of a step up, but given the alternative, c’mon! (And there’s a 3rd food holiday – National Cook Something Bold and Pungent Day – that is much too wide open to interpretation to do us much good. We’re having a fun and busy weekend in the Emerald City. Who’s got time to think?).

Oh, and it’s also my mother-in-law’s (Tara’s mom’s) birthday. Happy birthday, Tracy! Sorry I don’t have a nice, gift-wrapped scrapple for you.

Peas have been cultivated for nearly as long as humans have walked the earth, and pea soup dates back to ancient times. Greeks and Romans were growing peas around 500 to 400 B.C., and street vendors in Athens often peddled hot pea soup. The soup is made from dried split peas and can range from grayish-green to yellow in color, depending on the variety of pea used.

We have a busy day planned and nobody was crazy about serving split pea soup on Tracy’s birthday (with the possible exception of me – I love the stuff), so we took the easy way out and heated up a can of Campbell’s Split Pea with Ham. For an appetizer before the birthday dinner. As per usual, I loved it. Tracy loved it. Anne loves it. Tara thought it was disgusting, but took her requisite spoonful. My nephew Anthony and I polished off the rest of the bowl, ’cause we can appreciate a delicious soup! 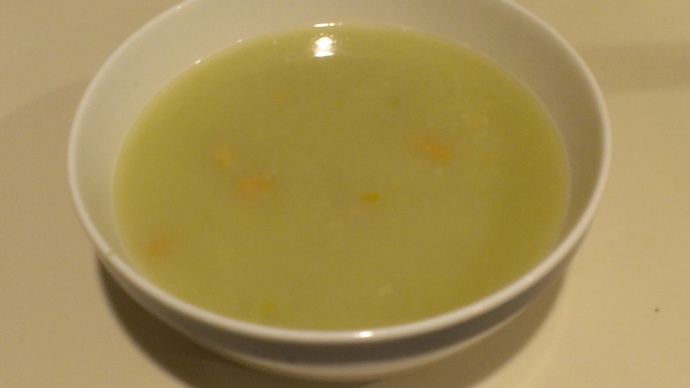