In the mood to sow your wild oats? Today’s your day! October 29 is National Oatmeal Day!

Oatmeal is a porridge or cereal made from ground, rolled, crushed, or steel-cut oats. Though oats have been a food source for thousands of years, they initially played second fiddle to wheat and barley. They were originally viewed as a weed-like plant and burned to clear room for more important crops. When they were used for food, it was mostly to feed livestock. The Scottish were the first to cultivate oats and use them as a food source, since oats grew better than wheat in Scotland’s short, wet growing season. This was met with derision by the English, who described them as “eaten by people in Scotland, but fit only for horses in England.” The Scots replied, “That’s why England has such good horses, and Scotland has such fine men!” Ooh. BURN. Oats were first brought to America in 1602, planted off the coast of Massachusetts. They were an important crop to George Washington, who sowed 580 acres in 1786. They were still predominantly a livestock crop in the U.S. until around the turn of the 20th century. As their health benefits became increasingly well known – oats are rich in soluble fiber, and have been shown to reduce cholesterol and prevent heart disease – oatmeal consumption rose dramatically. Today, it is one of the country’s most popular breakfast cereals.

To celebrate, I stopped by Starbucks for one of their specialty oatmeals, while Tara went the instant (and economical) route. I have to say, I was impressed with all of the add-ins Starbucks included…fruit, nuts, and a packet of brown sugar. Perfectly fitting for such a chilly autumn morning…it dropped to freezing today! 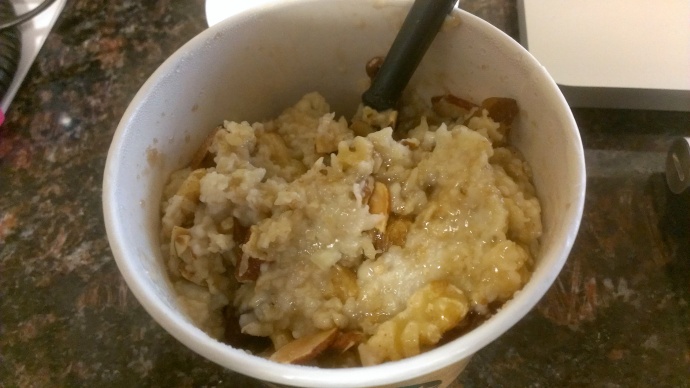