Angel food cake is the culinary opposite of Devil’s food cake: a light and airy sponge cake made with no fat (butter, cream, or egg yolks). It was named for its angelic light color, and was described as a “food of the angels.” Personally, I think angels would be more into wings, but what do I know? It is made by whipping egg whites until they’re stiff, adding cream of tartar as a stabilizer, and then folding additional ingredients in. The Pennsylvania Dutch, who began mass-marketing bakeware in the early 1800s, are given credit for inventing angel food cake, which perfectly fit the specialized cake mold they developed at the time. The first angel food cakes were baked by African-American slaves in the American south, and soon became a popular post-funeral meal. Perhaps the name had something to do with that? An early recipe for a “snow-drift cake” appears in Mrs. Porter’s New Southern Cookery Book, and Companion for Frugal and Economical, published in 1871, and a recipe for a similar “silver cake” is printed in What Mrs. Fisher Knows About Old Southern Cooking, Soups, Pickles, Preserves, Etc. in 1881. Angel food cake was a favorite of Lucy Webb Hayes, wife of  Rutherford B. Hayes, our 19th President.

We picked up some mini angel food cakes to celebrate, rather than messing around with making (or buying) a whole cake. They were like angel food cupcakes (though sadly, without frosting) and were just freakin’ adorable. I wanted to hug mine. But I ate it instead, with a cup of coffee before work. 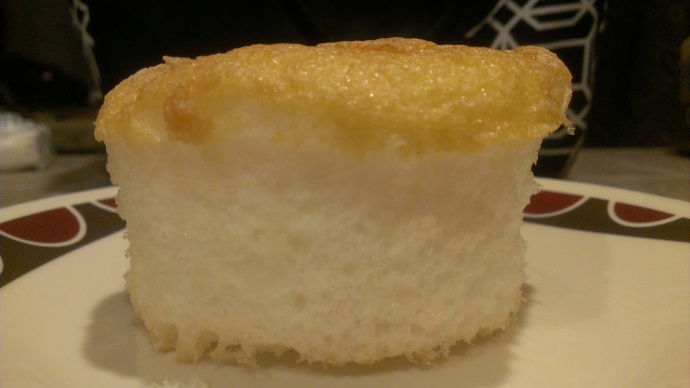