They say one man’s trash is another man’s treasure, so we’ll use the term “junk” lightly when we celebrate today’s food holiday. July 21 is National Junk Food Day!

It’s also National Ice Cream Day, but I’m going to scream if I have to eat ice cream again. We’ve had multiple versions of that holiday already, with more to come. If you don’t believe there can be “too much of a good thing,” go ahead and try this food challenge next year. You’ll be as sick of pies and cakes and ice cream as we are, trust me.

The term “junk food” was coined in 1972 by Michael Jacobson, director of the Center for Science in the Public Interest, and is defined as a food that has little or no nutritional value and is usually high in fat, sugar, salt, and/or calories. In other words, the typical American diet! (Not that we can really be blamed. A 2008 study showed eating junk food sends chemical signals to the brain that stimulate our senses in the same way that drugs like heroin and cocaine do. Oreos really can be addictive. Who knew?!). While the slang term has been around for only 40 years, junk food itself has existed since the dawn of time, back when neanderthals were dipping sticks in beehives and scraping out honey. Junk food is usually categorized by group, and includes salted snack foods, candy, sweet desserts, fried fast foods, sugary carbonated beverages, and Hot Pockets, which deserve their own special category. Some foods straddle the line between healthy and junk food. Like popcorn. I prefer to think of that as a bag full o’ hot vegetables, but I suppose the addition of butter and salt actually lands it in the junk food category. Other foods that can go either way, depending on the ingredients used and method of preparation, include hamburgers, pizza, and tacos. For example, a Doritos Locos Cool Ranch taco from Taco Bell is undoubtedly junk food, while a fresh carnitas taco from a street vendor is not. How’s that distinction? Clear as mud?

Today was ripe with possibility, since so many different things can be considered junk food. But things did not start out promisingly. On the way back from camping, we stopped at the Pig ‘n Pancake in Astoria, and I ordered Eggs Benedict with fresh Dungeness crab. Oops. Nothing even remotely “junky” there, nor were Tara’s sourdough pancakes. “We’re being too high-falutin’, babe,” I told her, so we aimed our sights lower. By the end of the day we had consumed some chips with zesty bean dip and queso, and frozen pizza for dinner. Whew! Talk about a save! 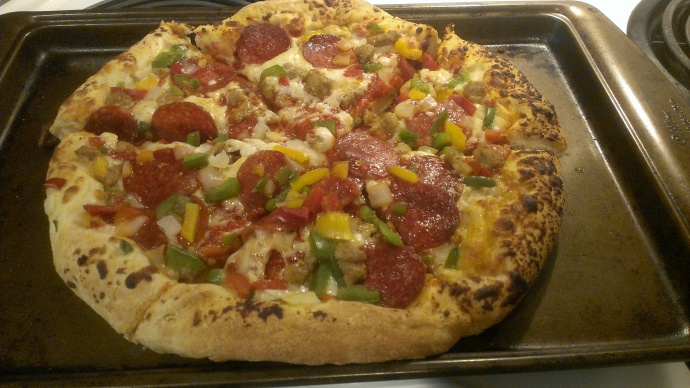