Despite the name, this cake has no ties to Germany whatsoever. It’s actually an American cake consisting of chocolate layers and topped with a coconut-pecan frosting. In 1852 Sam German, a chocolate maker, developed a dark baking chocolate for Baker’s Chocolate Company. It was named Baker’s German’s Sweet Chocolate and was a popular ingredient in cakes. It would take another century for the cake we recognize today to catch on; in 1957 the Dallas Morning Star printed a cake recipe submitted by Mrs. George Clay using the baking chocolate and a sweet coconut-pecan topping. Called German’s Chocolate Cake, the pastry was an immediate hit. General Foods, which now owned Baker’s Chocolate, distributed the recipe to newspapers across the country, dropping the possessive (‘s) and renaming it German Chocolate Cake. Baker’s Chocolate saw sales increase by 73%, and the cake became a nationwide staple.

Next you’re going to tell me french fries aren’t really from France.

Anyway, I’ve always been a big fan of German Chocolate Cake, and used to request it for my birthday, so I was certainly not complaining about “having to” celebrate this food holiday. German chocolate cake is notoriously difficult to make from scratch – eggs need to be separated and beaten, chocolate needs to be melted – so we took the easy way out and used a dark chocolate cake mix and coconut/pecan frosting. You know what? It still tasted pretty good! Even if it isn’t really German engineered. 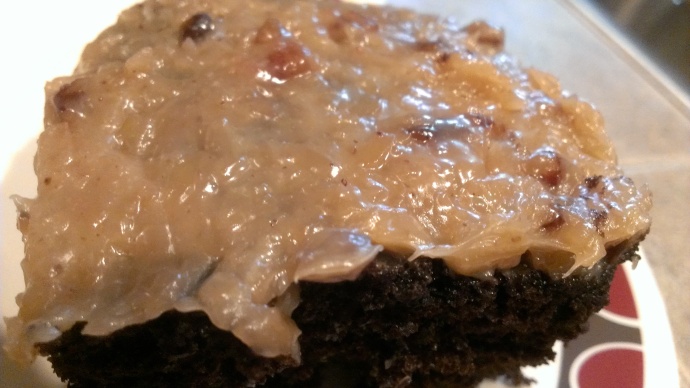