I’m not pulling a fast one over on you: May 23 is National Taffy Day!

Taffy dates back to the early 1800s in America. It was called treacle then, a type of syrup that was usually molasses-based. The treacle was boiled until it reached a hard cake-like consistency, and then pulled or stretched until it became fluffy and chewy. These taffy-pulling events became all the rage in the mid-1800s because, well, people had nothing better to do, I guess. Simpler times, simpler pleasures. The taffy was then rolled, cut into small pieces, and wrapped in wax paper to keep it soft. By 1883, taffy had become a popular confection in Atlantic City. That year, according to legend, boardwalk vendor David Bradley’s store was damaged by crashing waves during a storm, soaking his entire inventory of taffy. The next morning a young girl asked for a bag of taffy. “You mean saltwater taffy,” David allegedly grumbled in disgust. “You’d be foolish not to jump on the bandwagon with that name,” her mother remarked, and a new marketing strategy was born. Contrary to that incident and the name itself, future batches of saltwater taffy did not contain saltwater. The recipe is the same as original taffy, but the name connotes images of fresh air and ocean breezes. And sticky teeth. Saltwater taffy has been popular ever since, particularly in coastal and seaside towns. The pastel-colored candies are available in just about every flavor imaginable.

Unfortunately, the Oregon coast is 100 miles away, kind of a long roundtrip to make for taffy. Fortunately, we found a bag in Target that only cost $1.00. Unfortunately, it tasted like a $1.00 bag of taffy from Target. The next time we’re on the coast, we’ll pick up some of the real stuff! 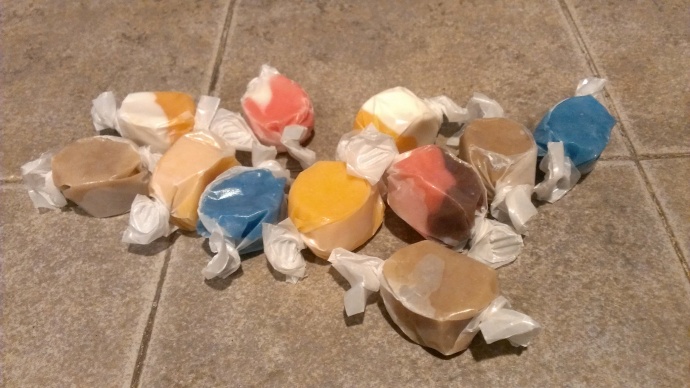