Eggs Benedict is one of those dishes that is delicious and feels upscale despite its relative simplicity. Take an English muffin, split it in half, top with ham or Canadian bacon, poached eggs, and Hollandaise sauce. Voila! Breakfast is served.

There are two separate origin stories for Eggs Benedict. According to one claim, a patron of Delmonico’s in New York – the first restaurant ever opened in the U.S. –  by the name of Mrs. LeGrand Benedict was bored with the same old menu choices, and wanted to try something new for lunch. So she conferred with the chef, Charles Ranhofer, who created Eggs a’ la Benedick in her honor. He published a cookbook in 1894 that included his recipe: Cut some muffins in halves crosswise, toast them without allowing to brown, thn place a round of cooked ham an eighth of an inch thick and of the same diameter as the muffins on each half. Heat in a moderate oven and put a poached egg on each toast. Cover the whole with Hollandaise sauce.

Version #2 appeared in the December 19, 1942 issue of New Yorker Magazine. It must be true, because it’s in print! According to the article, Wall Street broker Lemuel Benedict, suffering from the mother of all hangovers after a late-night bender, ordered “some buttered toast, crisp bacon, two poached eggs, and a hooker of Hollandaise sauce.” It’s unclear just how drunk he still was, ordering a hooker in public like that, but the Waldorf Hotel’s chef, Oscar Tschirky, complied, and was so impressed with the results he added Eggs Benedict to the menu after making a few substitutions (English muffin instead of toast, Canadian bacon instead of crisp bacon, no hooker). 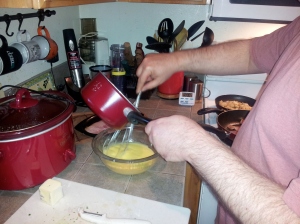 It’s unclear which of those stories is true. Or if either of them is true, as there are other theories pertaining to its origin that include Popes and French Commodores, but it really doesn’t matter how the dish came to be. What’s important is, the dish came to be!

There are many variations on Eggs Benedict. At least twenty different varieties exist, with inventive chefs constantly adding new takes. We recently went out to breakfast at a place in Portland that served a version of Eggs Benedict with pepper bacon and tomatoes, and it was wonderful. But I prefer the original version best, and when it came time to celebrate today’s challenge, we decided to make the dish from scratch. A feat we had never before attempted. Slicing the English muffin was a cinch, and the leftover ham from yesterday’s challenge made the perfect topping. But neither of us were familiar with poaching an egg or making Hollandaise sauce. That’s why they invented cookbooks (my inspiration for the Hollandaise was Martha Holmberg’s Modern Sauces) and the internet (thank you, Allrecipes, for the egg poaching instructions). We tag teamed this dinner effort: I made the sauce, Tara poached the eggs, and together we created Eggs Benedict. The result? Absolutely delicious! The leftover HoneyBaked ham was the perfect base, too. This was one of our favorite Eat My Words challenges to date!