You just might melt with desire over today’s food holiday. April 12th is National Grilled Cheese Day – a favorite of kids and adults alike! At least these two adults. In fact, last year Tara and I did a grilled cheese challenge on my regular blog…long before this one ever got started. You can read about it here. Suffice it to say, we both love grilled cheese, and were happy to be able to celebrate it today.

For the record, it’s also National Licorice Day. We both despise licorice, so choosing which holiday to celebrate was a no brainer! Besides, not only is today National Grilled Cheese Day, but April is Grilled Cheese Month. How could we resist?

Bread and cheese have been served together at mealtime for centuries – a practice dating back to at least Roman times. However, it wasn’t until the 1920s – at least here in the U.S. – that the bread and cheese actually joined forces, when people who were flat-ass broke and struggling to survive the Great Depression took two inexpensive ingredients, sliced bread and American cheese, and turned them into a cheap meal. They were a staple of the armed forces during World War II; navy chefs prepared countless “American cheese filling sandwiches” aboard ship. Early versions of the sandwich were served open-faced and initially called Cheese Dreams, and then “toasted cheese” or “melted cheese” sandwiches, remaining popular well into the 1960s. That was when enterprising chefs realized they could add a second slice of bread and create a more filling meal, one that was capable of being eaten by hand. And also when they were first referred to as “grilled cheese” sandwiches. The very definition of comfort food, grilled cheese sandwiches fell out of vogue for a number of years, but starting in the 1990s have enjoyed a resurgence in popularity. They can be made with any cheese that will melt, and an endless array of toppings (see link to our blog post above).

For today’s challenge, we kept it simple and went back to basics. Just bread and cheese (cheddar for Tara and American for moi). After all, why mess with perfection? 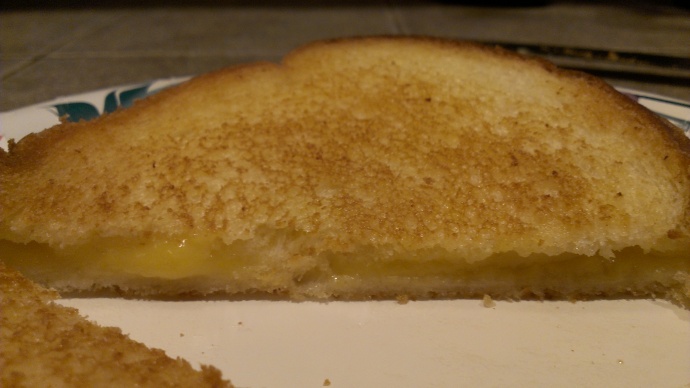