Paella – Spanish for “pan” – was invented by Spanish peasants, who would gather the cheapest ingredients they could find, throw them together in a big pan, and cook them over an open fire. Traditionally, this included chicken, duck, rabbit, and snails. When the meal was ready, laborers would gather ’round the pan and eat from it directly using long, wooden spoons. After awhile, the Spanish were like, “Wait a minute…why are we eating snails when there’s a bounty of seafood available off the coast? What are we, French?!” The recipe evolved to include rice, beans, spices, tomato, and seafood. Mixed paella – incorporating both meat and seafood, along with fresh vegetables, and flavored with saffron – became the norm, and is considered  Spain’s signature dish. It is a popular custom to cook great, big pans of paella at festivals and other public gatherings in Spain. Chefs use enormous paelleras (specialized paella pans) to cook and feed the masses.

Paella was one of those dishes that looked intimidating when we skimmed over the food holidays before kicking off this challenge. My only experience with the dish was a quick reference to it in a Seinfeld episode. The exchange was brief but memorable.

JERRY: What is that anyway?

GEORGE: It’s a Spanish dish. It’s a mélange of fish, and meat with rice. Very tasty.

So, with that basic bit of information to go on, I researched recipes – and discovered you can add just about anything to a paella. There were hundreds of recipes to choose from, but I decided to freestyle-it and adapt my own recipe from one I found. The essential ingredients were the same: rice, saffron, chicken, and seafood. From there I could get creative, and that’s exactly what I did. After work I stopped by the grocery store and bought shrimp and scallops. I couldn’t get clams though, and the reason is bizarre and sad. The seafood monger told me their clam supplier in Alaska suffered a tragedy recently: a boat sank killing every crew member but one, and the lone survivor refused to go out clamming anymore (smart dude) – so Fred Meyer is fresh out of clams.

A moment of silence for the lost clammers, please.

As for the paella? It sure looks good in this picture. There was a lot of work involved, and I think it could have benefited from a few changes – more seasoning, the addition of some chorizo, etc. But all in all, it wasn’t bad. Just a lot of work for a Wednesday evening. And one of our more expensive dishes: the tiny jar of saffron alone cost $10. Plus the seafood, chicken, etc…. 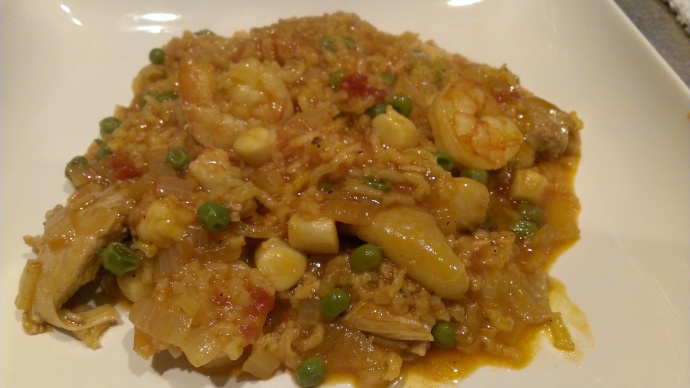