Today’s food holiday will give you something to crow about! It’s National Coq Au Vin Day, which translates to “rooster in wine.” Cock-a-doodle-do enjoy this tasty French dish!

Coq au vin is a rustic French dish that originated in the Burgundy region and was popular with peasants because the ingredients were plentiful and cheap. Though usually prepared with chicken nowadays – at least in America, where common sense and decency rule and we don’t consider snails a delicacy (oh, those wacky French!) – French commoners did, in fact, use rooster in the recipe because they were dirt poor and couldn’t afford younger, more tender hens.  It was made with red wine because the acids in the alcohol would help tenderize the meat of the rooster (older birds who were all clucked out and could no longer reproduce were put out of their misery this way). Considered a classic, country-style casserole ideally suited to colder winter months – the definition of comfort food – coq au vin was popularized in the U.S. by Julia Child, who featured a recipe in her popular 1961 cookbook Mastering The Art of French Cooking and prepared it often on her television show The French Chef. It became one of her signature dishes, as closely associated with the likable old broad as her husky, distinctive voice. (Don’t get me wrong, I have nothing against Julia Child. I remember watching her and Justin Wilson, the Cajun chef, often while growing up. And Yan Can Cook. It’s no wonder I’m addicted to modern cooking shows like Top Chef, Chopped, and Master Chef). 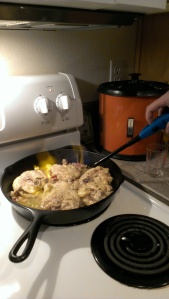 Julia told me to set the brandy on fire. So I did.

Fresh out of cock – (must. bite. tongue) –  we opted to make our coq au vin using chicken instead. And decided, since the inspiration for this blog was Julie & Julia, to replicate Julie Powell’s idea for one night by preparing Julia Childs’ classic recipe for coq au vin, found here. Sometimes we are chided for “taking the easy way out” and buying the foods we celebrate from the grocery store or restaurants, but I call fowl on that. First off, we do in fact prepare many of these meals from scratch. Secondly, who cares if we don’t? That was never the intention of this challenge. We are busy with work and kids and, you know, planning a wedding. I think we’re doing extremely well under the circumstances! I just had to get that out there. Most of you have been extremely supportive, and Tara and I appreciate that. I should also mention that today is National Water Day. Now, if we had decided to celebrate that, I too would be screaming “cop out!”

As for Julia Childs’ coq au vin? There was a lot of prep work involved, and very precise cooking instructions with multiple steps, as you might imagine. This meant a very late dinner for us – approaching 9 PM. Luckily, it’s a Friday night, so who cares? And it tasted absolutely DELICIOUS. I can’t emphasize that enough. The sauce was rich and hearty and packed with flavor. This was an amazing dinner! 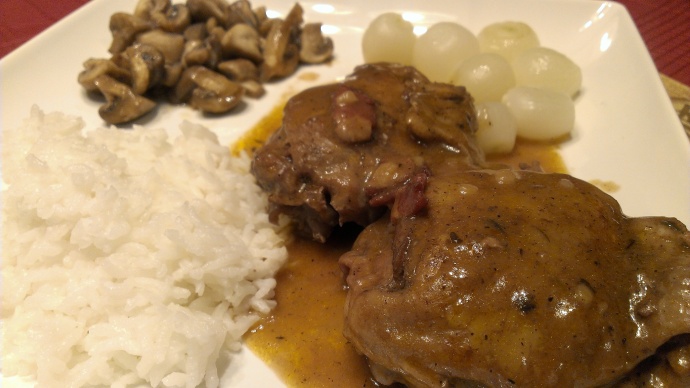 That Julia Child was onto something. This was incredible!