Today’s food holiday is a very fulfilling one: we honor one of my personal favorite types of pasta. It’s National Ravioli Day!

Ravioli is any filled or sealed pasta, so technically tortellini is a type of ravioli. Which means we’ve already celebrated this holiday! But ravioli are so good, I don’t mind doing it again. Wontons, pierogis, and dumplings are also variations of ravioli. Burritos are not, unless you make yours with pasta, which would be…hmm…actually, a brilliant idea! Ravioli are traditionally filled with either meat or cheese, and simmered in sauce or broth. 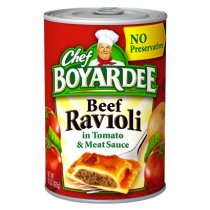 Haute cuisine to a kid!

The earliest reference to ravioli is found in a manuscript by Tuscan merchant Francesco di Marco Datin, dated sometime in the 14th century. Francesco included a recipe for ravioli made with chopped blanched green herbs mixed with beaten egg and fresh cheese, and served with – this is the weird part – Newman’s Own Sock It To ‘Em Sockarooni pasta sauce. Oops, I mean, served in broth. That makes more sense! Actually, tomato-based sauces didn’t even exist in Italy for another couple of centuries, when they were imported from the New World. Italian cuisine without tomato sauce? That’s hard to fathom. Ravioli are traditionally made at home and stuffed with ingredients like ricotta, spinach, and nutmeg, but they are also prepackaged for convenience. The first canned ravioli was produced during World War I, and let’s face it, what kid hasn’t enjoyed a bowl of Chef Boyardee Ravioli while growing up? In fact, Tara professes a fondness for this stuff even today.

Fortunately, we did not run out and heat up a can of Chef Boyardee Ravioli for today’s challenge, though we also didn’t make our own fresh pasta from scratch (though that is a goal of mine). We were at Costco over the weekend, and picked up a package of Jarlsberg & Portobello Mushroom ravioli, so I cooked those up for lunch, and served them with a mushroom alfredo sauce. Good stuff! 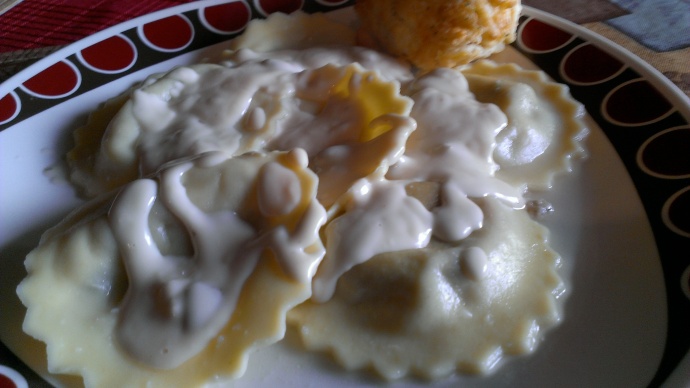