Not very long ago, oats weren’t considered fit for human consumption. They were seen as food for horses. Kilt-wearing, bagpipe-playing, Loch Ness Monster-harboring Scots were the first to incorporate oats into their own diets. In a friendly little bit o’ UK rivalry, the English used to say, “A grain which in England is generally given to horses, but in Scotland supports the people.” The Scots fired back,“England is noted for the excellence of her horses; Scotland for the excellence of her men.” This was proven true on the battlefield: when Rome invaded England they had no trouble dispatching the British army, but Scottish soldiers – who were fond of carrying around oatcakes for nourishment – put up a real fight. Lest you think that’s a coincidence, health studies show that a diet consisting of oats lowers cholesterol and contains large amounts of fiber, vitamin E, selenium, copper, manganese, iron, magnesium, and protein. Oats are good for you (though you may set off an airport metal detector if you consume too many pre-flight). Oatcakes were more like a pancake back then, but eventually evolved into cookies in the 19th century. The first known recipe for oatmeal cookies appears in Fannie Farmer’s 1896 Boston Cooking School cookbook.

Raisins are a common ingredient in oatmeal cookies, but Tara uses Craisins instead. Plus white chocolate. She whipped us up a batch this evening, and my mouth was watering while they were still baking in the oven. I love these cookies! Here’s the recipe: 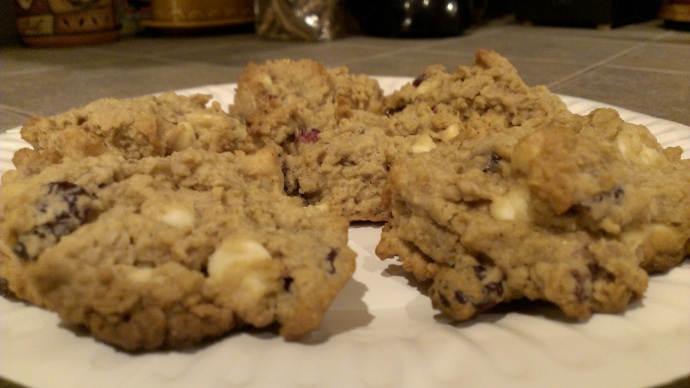