Today is one of the stranger food holidays this year. Not the ingredients themselves so much as the combination of ingredients. Oatmeal, nuts, and waffles are all celebration-worthy (and each, in fact, has its own national food holiday). But whoever heard of oatmeal nut waffles? It’s an oddly random day to celebrate. But as I’ve said before, we don’t make the rules, we only follow them. So a hearty, happy National Oatmeal Nut Waffle Day to you and yours!

Waffles are essentially communion wafers on steroids. The two emerged at the same time, in the 9th century, and both were initially flavorless discs made with grain flour and water. Early waffle pans were made of iron and depicted images of Jesus and the crucifixion. It took 200 years for folks to realize that waffles might taste decent if they had a little flavor, so ingredients like orange blossom water and honey were added. The first known waffle recipe was published in the 14th century, and read: Beat some eggs in a bowl, season with salt and add wine. Toss in some flour, and mix. Then fill, little by little, two irons at a time with as much of the paste as a slice of cheese is large. Then close the iron and cook both sides. If the dough does not detach easily from the iron, coat it first with a piece of cloth that has been soaked in oil or grease. Hey…why isn’t today National Wine Waffle Day?! Harumph. Modern waffle irons first appeared in the 15th century, with the classic grid shape emerging soon after. Waffle recipes became more sophisticated, with the additions of sugar, butter, and eggs. Dry waffle mix was developed in the 1930s, and the Dorsa brothers from San Jose, California developed a frozen waffle they went on to name Eggo in 1953. Belgian waffles – larger and lighter thanks to the addition of yeast in the batter – were introduced at the 1962 Seattle World’s Fair, and quickly became popular. Americans liked the texture and the bigger squares and deeper pockets, perfect for holding melted butter, syrup, spare change, and lint.

In researching recipes for oatmeal nut waffles, I discovered something interesting: they are very healthy, made with whole wheat flour, and honey in place of sugar. Flush with my baking success yesterday, I whipped up a batch this morning while Tara was getting ready for work, using pecans for the nuts.The waffles were very dense and not at all sweet, but that’s why they invented syrup. Overall they had a good flavor. Tara and I talk about opening a restaurant someday, and these would be a good addition for the health nut/vegan crowd. I doubt I’d make them again, but they did turn out pretty good. 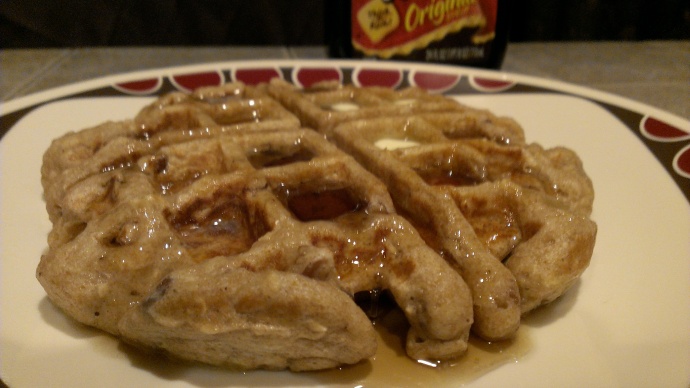