February 23rd is an a-peeling day: we celebrate banana bread! We also have it ruff, too: in addition to National Banana Bread Day, it’s National Dog Biscuit Appreciation Day. Because it’s the weekend and we were feeling adventurous, we celebrated both holidays!

The first recipe for banana bread appeared in a Pillsbury cookbook in 1933. When baking soda and baking powder became popular in the ’30s, they gave rise (ha-ha, a little baking humor for you!) to quick breads that didn’t require yeast. The use of these ingredients makes banana bread more like a cake than a loaf of bread: it’s moist and sweet. Banana bread’s popularity skyrocketed in the ’60s (ha-ha, a little “space age” humor for you!) when home baking became all the rage. Cookbooks of that era featured many different bread recipes made with fruits and nuts, and banana bread took off like John, Paul, George, and Ringo (ha-ha, a little Fab Four humor for you!). It quickly became a staple at bake sales. It’s also a very popular breakfast entree in Australia, where hungry dingo hunters often stop in at cafes for a cup o’ joe and a slice o’ banana bread. 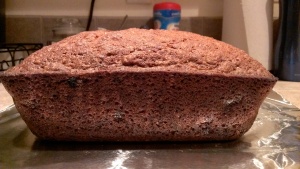 Banana bread is one of those baked delicacies that is so easy to make, even I can do it! And I wanted to, because every challenge so far that has required baking, Tara has done. So I did the banana bread. Used a new recipe out of Bon Apetit magazine, and it was pretty basic, but I added crushed macadamia nuts to give it a Hawaiian flair. It turned out really good!

Treats for dogs have existed since as long as dogs have been domesticated, but often included stale, moldy bread and rotten leftovers. That’s an arf-ul way to treat “man’s best friend!” In the mid-1800s James Spratt (no relation to Jack) was traveling abroad and felt sorry for the stray dogs in England scavenging for leftover food, so when he returned home to America he was inspired to create “Meat Fibrine Dog Cakes,” hearty treats consisting of meat, grains, and vegetables. Dogs everywhere howled with approval. In 1908, the F.H. Bennett Biscuit Company in New York developed a crunchy, bone-shaped biscuit for dogs, made with milk, minerals, and meat. They called it the Milk Bone. The rest is canine history.

Not the greatest thing I’ve ever tasted.

Now, I suppose this holiday is for the dogs. Literally. But we are also nothing if not literal, so Tara and I stopped by a pet store, where we bought a couple of dog biscuits. And proceeded to eat them ourselves.

PetCo sells a variety of dog biscuits in bulk. They’re set out in bins and come in a pretty big selection of flavors. Some of them resemble chocolate chip cookies (and actually taste like chocolate chip cookies). There were also pretzel varieties, cinnamon cookie flavors, etc. But I wanted a couple of plain, old-fashioned dog biscuits. Boy oh boy, I don’t know what I was thinking. They tasted horrible. Hard and chewy and dry and grainy. It took every last ounce of willpower (and a big glass of milk) to choke mine down. And then, Tara followed suit. Pretty bad stuff…definitely my least favorite “food” in this challenge. Then again, they were never meant for human consumption! But that just goes to show you the lengths we are willing to go to in the name of fun.