Today’s food holiday warrants a big celebration: it’s National Cherry Pie Day! In case that reference is a little too subtle (or a little too 1990) for you, here’s what I’m talking about.

Warrant takes “innuendo” to a whole new level there! But they are singing about cherry pie, so it was only appropriate to share.

The fact that National Cherry Pie Day is celebrated in February – and within days of President’s Day – can’t be a coincidence. After all, George Washington will forever be associated with cherries thanks to his famous “I cannot tell a lie; I chopped down the cherry tree” admission of guilt. Even though cherry pies are a quintessentially American dessert, credit for their invention actually goes to Queen Elizabeth I of England, whom it is believed not only came up with the idea for the pie but allegedly baked it herself in the royal kitchen back in the 16th century. In fact, the girl in Warrant’s video is modeled after Her Highness. Pies (originally spelled “pyes”) have been around a lot longer than that, but were usually made with meat. During the Medieval period, whole birds were typically baked into pies and their feet were left dangling out of the crust, to be used as handles. You might think that sounds disgusting, but I say it’s handy and convenient! Fruit pies (or pasties) were developed right around the time of the Queen’s reign. When pies came to North America, colonists added sugar and spices to the crusts to make them edible; prior to this, crusts were called “coffyns,” oddly appropriate considering they once contained whole dead birds inside, and were virtually inedible. Thankfully, cherries are a whole lot more palatable than dead foul, which probably explains why cherry pie is such a popular dessert. It was, in fact, a favorite of Kyle MacLachlan’s character, Dale Cooper, on Twin Peaks, who enjoyed his pie with a cup of coffee.

Perhaps that was the inspiration for our celebration this morning. Or maybe we were just feeling lazy. There are other pie holidays to celebrate this year, and I promise at some point we’ll make a homemade one – when the ingredients are in season (i.e. strawberry rhubarb pie in June). But today, we shared one of those cheap prepackaged cherry pies that didn’t even have the decency to be Hostess, for crying out loud! But hey, it still counts. And, much like Agent Cooper, we had ours with coffee. 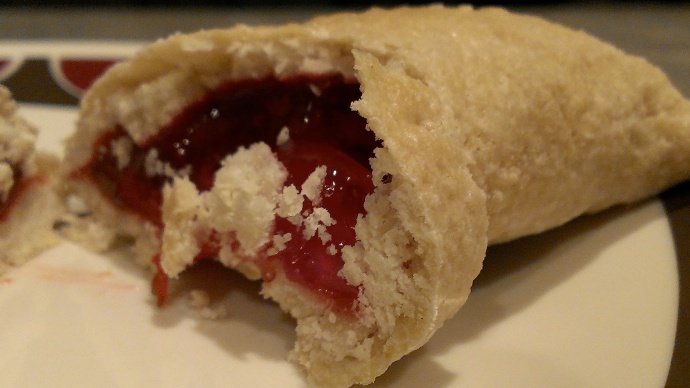 Thank you, Queen Elizabeth I.