I’ve always been a fan of duck. Rich and succulent, it’s one of those dishes that I’ll frequently order if it’s on the menu. Unfortunately, there’s no McDuck yet, so I’m stuck with fake rib sandwiches most of the time.

I quack myself up.

Fortunately, today is National Peking Duck Day, giving me an excuse to seek out and enjoy duck. Tara and I were worried about this day early on. Peking Duck is a complicated dish to make, and we weren’t sure where to find it. It’s certainly not on the menu of the local Panda Express. But luckily, Portland is a melting pot of cultures, and a Yelp search gave us the name of a Chinese restaurant that serves it. So, game on!

Peking Duck is the national dish of China, and originated in Peking (now Beijing) during the Imperial Era. It was considered an upper class dish, and was a hit with royalty during the Ming Dynasty. In fact, the dish was partially responsible for mending the rift between China and the U.S. in the 1970s. When Secretary of State Henry Kissinger traveled to China to meet with Premier Zhou Enlai, diplomatic talks were at a standstill until lunch was served. Kissinger was so fond of the Peking Duck, he said, “My boss must try this!” So Richard Nixon was invited to China in 1972, and he too raved over the duck. In fact, the second half of his famous speech was inadvertently drowned out by a passing helicopter and lost to history. “I am not a crook,” Nixon famously declared. “But I would lie, cheat, steal, and eavesdrop all over again for another bite of that delicious Peking duck.”

If only we’d paid closer attention…

“Well, coat me in syrup and hang me on a hook!”

Peking Duck is made from a breed of duck called the Pekin. It’s a white bird with an orange bill and feet, and was the inspiration for Donald Duck. True story. Unlike the cartoon bird, real Pekin ducks do not wear blue sailor suits (but if they did, they would at least have the decency to put on a pair of pants). WARNING: DO NOT READ THIS NEXT PART IF YOU ARE SQUEAMISH OR ON THE FENCE ABOUT BECOMING A VEGETARIAN. Pekin ducks are raised in captivity for exactly 65 days, where they are force-fed 4 meals a day to fatten them up before being slaughtered, plucked, and eviscerated. Air is then pumped beneath the skin to separate it from the fat. The duck is then slathered in syrup and hung on a hook to dry for 24 hours before being roasted. Yummy, huh? Somewhere there is a Sarah McLachlan song waiting to be written.

And for the record, bacon doesn’t just magically appear on your plate, either! Though it would be wonderful if it did… 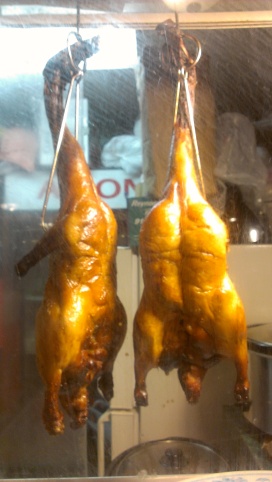 Authentic Peking Duck in Portland, OR.

Not in the mood to gut our own bird and hang it from a meat hook (even though there’s a wetlands behind the condo complex and we surely could have pulled this off), we instead drove to a Chinese restaurant in Portland, where we had phoned in an order of Peking Duck to go.

Peking Duck is renowned for its crispy skin and flavorful meat. Sure enough, this place (shout out to Shenzhen) did not disappoint. I thought it was wonderful. Tara, who is not a fan of duck, was unimpressed. Kind of a recurring theme so far, isn’t it? But the tables will be turned on National Watermelon Day. Can’t stand that stuff, and she loves it.

The rest of the meal was good, too. I even made homemade fried rice.

But the duck was, without a doubt, the star of the show.