Today is National Whipped Cream Day, and that’s fortunate since we are out of town visiting family. We don’t mind the tougher challenges, but it’s nice not having to worry about anything more difficult than how to use a can of whipped cream creatively while we’re on the road.

While many of these food holidays were apparently chosen at random, January 5 is no coincidence: it’s Reddi-Wip founder Aaron Lapin’s birthday. Mr. Lapin (“Bunny” to his friends) was the first person to put whipped cream in a can. He passed away in 1999, but his creation lives on.

Whipped cream existed long before Bunny was even a gleam in his parents’ eyes. Long, loooong before. Recipes have been discovered dating back to the 16th century, when whipped cream was known as “milk snow.” (How cute is that name? Can we bring it back?). By the 18th century the English began calling it “snow cream” (also cute). It is also known as Crème Chantilly, but that just makes me think of the old Big Bopper song. You know, Chantilly lace and a pretty face. Before my time, but I did see La Bamba and loved it. In 1946 the aerosol can was invented, and the sweet concoction (nothing more than cream that has been whipped – duh – and often sweetened and flavored with vanilla) took off when Mr. Lapin started selling Reddi-Wip out of the can. I think we can all agree that the man was a genius, no?

Imitation products exist (Cool Whip and other “whipped toppings”) but they do not contain dairy, and after the flak we received yesterday there was no way we were going to try to use a fake product this time around. I did get a Facebook message that said, I thought after yesterday’s do over you had learned your lesson about cans! Get or make the real stuff! My response? We have to draw the line somewhere! Otherwise people might accuse us of cheating because we didn’t milk our own cow to make the cream in the first place. A can of Reddi-Wip is perfectly acceptable.

After a busy day on the go, we didn’t get back to Tara’s mom’s house until 9 PM. You know what sounded really good at that point? A mug of hot cocoa. Topped with real whipped cream. 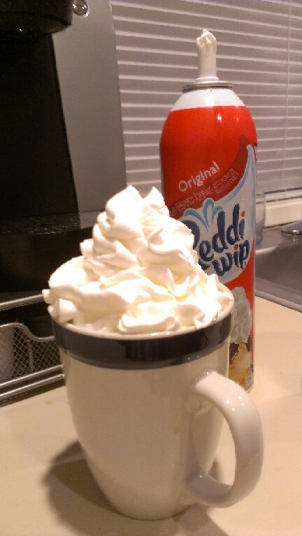 And THAT hit the spot!