The beginning of 2013 marks the start of our yearlong food challenge, Eat My Words. Or should I say, food and beverage challenge, because today is National Bloody Mary Day. Given our fondness for this beverage, it’s not much of a stretch to begin this ambitious project with something so easy, but at least we get to ease into things.

The origins of the Bloody Mary are unclear. Paris bartender Fernand Petiot claimed to have invented the drink in 1921; his concoction was a mix of nothing more than 1/2 vodka, 1/2 tomato juice. He later added worcestershire sauce, lemon juice, Tabasco, and salt. Comedian George Jessel said he invented the Bloody Mary in 1939, at a bar in New York City. The name has been associated with Queen Mary I of England, the actress Mary Pickford, and a waitress named Mary who worked at a Chicago bar named the Bucket of Blood. Where it came from may be in dispute, but one thing is certain: the Bloody Mary is delicious!

Although, I didn’t always feel this way. I had tried a few Bloody Marys over the years, mostly using pre-made mixers, and never cared for them. Until I met Tara. She swore she made a killer Bloody Mary, and in fact – within 5 minutes of meeting her in person for the first time, in March of 2011 – I was sipping one of her famous concoctions. And it was damn good, too – the best I’d ever had. I’ve been hooked ever since.

Tara here.  From here on out, you’ll know it’s me from the italics.

I have my friend, Robin, to thank for showing me how to make a killer Bloody Mary.  I’ve made many since she shared her secrets and when someone asks me for the recipe, I always get it wrong because I just throw in a little of this and a little of that.  This morning, though, I actually took notes while building our first cocktail of the new year. 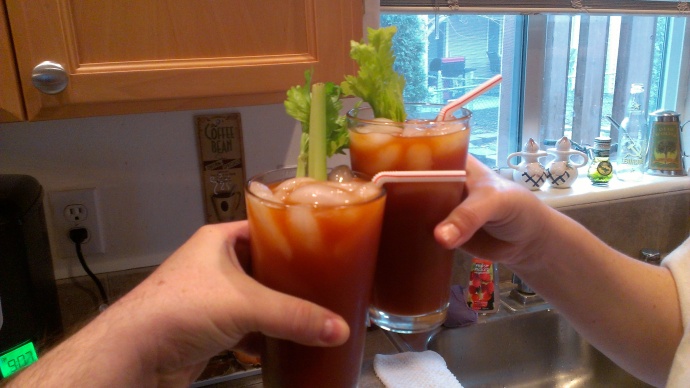 Toasting to the start of our challenge!

Start with a large glass filled three quarters with ice.  These are about fourteen ounce glasses.

Pour worcestershire sauce for six to seven seconds.  (Seriously, I was counting while it dribbled into the glass.)

Mark likes his spicy, so to his glass I added six dashes of Tabasco.

Next pour in two to three ounces of vodka.  Thankfully, you can get away with using cheap vodka since the harshness is masked by all the other good stuff.  Our favorite is Absolut Peppar.  It’s a good thing it’s harder to find in Vancouver because it’s a little on the pricier side and we spend enough on booze as it is!

Then add ten shakes of celery salt.  Or less, I suppose.  Mark just read this over my shoulder and asked if I really put that much in our drinks.  Hey…I like ’em salty.

Which is why I use half Clamato and half tomato juice to fill the rest of the glass.  Make sure you leave room for garnish!

We all know the typical Bloody Mary garnish is a celery stalk and maybe a green olive or two.  As tasty as they are, there are so many more options for dressing up your cocktail.  We keep on hand pickle spears, pickled green beans, pickled asparagus, blue cheese stuffed olives, garlic stuffed olives, and an italian garden mix of pickled cauliflower, carrots, and peppers.  Yummy!

Lastly, top it all off with a squeeze of lemon AND lime wedges.  Enjoy!

If you have a favorite Bloody Mary fixin’ or recipe, we’d love if you’d share with us. As good as these are, there’s always room for improvement!