And though out of season, it is also National Sangria Day. This spiked punch, which originated in Spain, is made with red wine, brandy, simple syrup, and fresh fruit. Lots of it. You could shake Carmen Miranda’s hat over the punchbowl and still not have enough for a proper pitcher. Since there isn’t much fresh fruit in season the week before Christmas, we’re celebrating fried shrimp instead.

Shrimp have been an important food source for eons. By eons, I mean, a really long time! Archaeologists in 1991 discovered ancient raised paved areas near the coast of Chiapas, Mexico that they theorized were used for drying shrimp in the sun, and clay hearths nearby were substituted when there was no sun. Physical evidence of shrimping dating back to 600 AD was discovered off the southeastern coast of North America, evidence that Native Americans in that region incorporated the crustacean into their diets. And in the 3rd century AD, the Greek author Athenaeus wrote “… of all fish the daintiest is a young shrimp in fig leaves.” I don’t know about the fig leaves, but I’ll agree with the shrimp. There’s a reason it’s the most popular seafood in the U.S., after all! They can be cooked and eaten using a variety of techniques. Just ask Bubba from Forrest Gump! Today, of course, we’re asked to enjoy them fried. Well, okay…if you insist!

We drove up to Seattle for an early Christmas visit with Tara’s mom and family today. On the way, we stopped at Mrs. Beesley’s, a favorite roadside burger stand, for a fried shrimp basket. 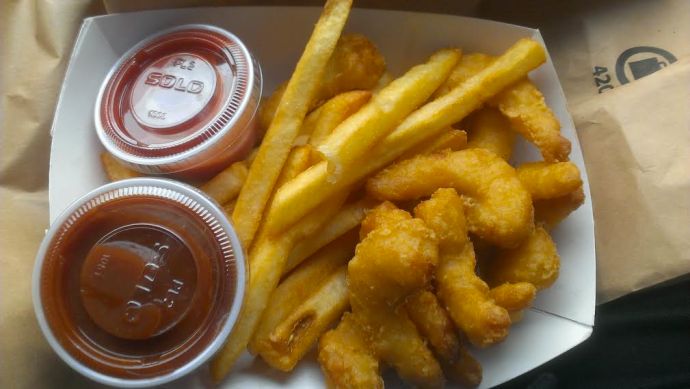