Since no food holidays can get pasta me, today we are celebrating National Fettuccine Alfredo Day! (Bad Pun Day is every day in my book. Lucky you).

Fettuccine Alfredo was invented by a guy named Bob. OK, just kidding. His name was Alfredo. Bet you didn’t see that one coming! Alfredo Di Lelio owned a restaurant called Alfredo in Rome in 1914. While his wife was pregnant with their first son in 1914, she didn’t have much of an appetite. Since Alfredo liked a woman with a little junk in her trunk, he was desperate to get her to eat again, so he created a dish with fettuccine noodles, butter, and parmesan cheese that he knew she would be unable to resist. He was right, and it was so good he added it to his restaurant’s menu, where it quickly gained cult status. Hollywood stars Douglas Fairbanks and Mary Pickford were honeymooning in Rome in 1920, and stopped in for a plate of Alfredo’s alfredo at Alfredo. They loved the dish so much, they gave Alfredo a golden fork and spoon, and a photo of them eating in his restaurant. He proudly displayed these items on the wall, where they still hang to this day (the restaurant is still open, under the name Alfredo alla Scrofa. Next time I’m in Rome, I’m checking it out). Fairbanks and Pickford helped spread the word, and the dish became wildly popular. Interestingly enough, even though Fettuccine Alfredo is just as popular in Italy and Europe, nobody over there calls it that. It is known, instead, as “Fettuccine al burro;” burro meaning butter in Italian, not a type of ass.

Nowadays, Fettuccine Alfredo is typically made with cream, because butter only didn’t provide quite enough fat and calories. Other ingredients, such as chicken or shrimp, are often added. I used a jar of Alfredo sauce with mushrooms, and it turned out delicious. Not homemade? So what. There is no denying the importance of convenience during this challenge. Besides, we have to work on tomorrow’s food tonight, so…yeah. All hail Bertolli. 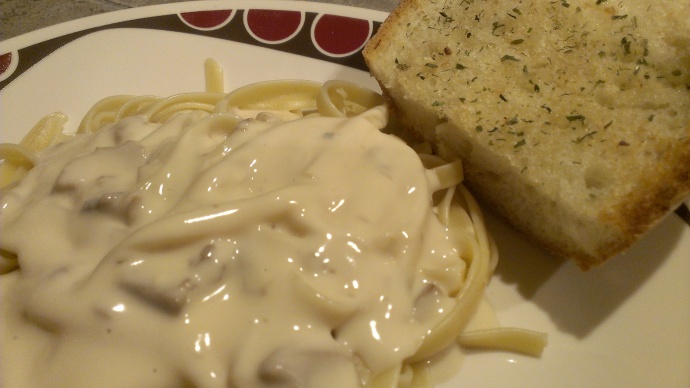